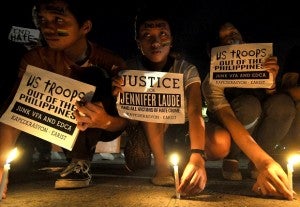 Members of LGBT group lights candle during a rally to call for justice on slain transgender Jennifer Laude along España Boulevard in Manila. INQUIRER PHOTO / RICHARD A. REYES

MANILA—A party-list lawmaker on Friday criticized President Benigno Aquino for being “mum” and “missing in action” in the killing of a Filipino transgender woman allegedly by an American serviceman in Olongapo City last Saturday.

“It has been a week but the President has yet to face the nation and at the very least personally reassure the [family of Jeffrey “Jennifer” Laude] that justice will be served. Why is Aquino mum on the [Pfc. Joseph Scott] Pemberton case?” Kabataan Representative Terry Ridon said.

In a statement, the congressman said Aquino was being cowardly by “hiding behind his spokespersons and not having the courage to not only denounce the brutal killing but also assert Philippine sovereignty in connection with the case.”

“He might as well resign from his seat as it appears that he’s not brave enough to lead the country, especially with regard to this thorny issue,” Ridon added.

Earlier, the Laude family called on the President to personally make sure that the suspect be served with the complaint by Friday.

“Aquino must be afraid of offending Washington – that’s the only plausible reason why he’s not appearing publicly to address Ms. Laude’s death. It is a deplorable act and unpatriotic act, and insults the Philippines as well as the grieving family,” Ridon said.

“The Aquino administration’s perfunctory handling of the case is evident. It has already been a week, yet the government has yet to exert pressure on Washington to waive custody over Pemberton,” Ridon said.

He also called on the US military “to immediately show Pemberton to the public.”

“How can we be sure that he’s still in the Philippines? All we have is a verbal commitment from Washington. Pemberton must appear to the public as soon as possible. The Aquino administration – at the very least – should ensure this,” Ridon said.