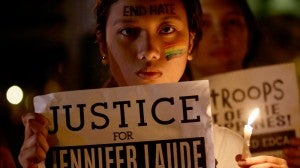 Protesters, mostly supporters of LGBT (Lesbians, Gays, Bisexuals and Transgenders), hold a lit candle and display messages to demand justice in the killing of a Filipino transgender Jeffrey “Jennifer” Laude, with a U.S. Marine as a possible suspect Tuesday, Oct. 14, 2014 in Manila, Philippines. AP

MANILA, Philippines–The subpoena and complaint against the US Marine suspected of killing Filipino transgender Jeffrey “Jennifer” Laude have been served to the US Embassy, the Department of Foreign Affairs (DFA) said in a statement.

“The Office of the City Prosecutor of Olongapo City, [Friday] served the subpeona and complaint against Private 1st Class Joseph Scott Pemberton for the murder of Laude along with the subpoena for four US Marines required as witnesses for the case,” Foreign Affairs Spokesman Charles Jose said in a text message to reporters.

“The preliminary investigation will commence at the Office of the City Prosecutor on  21 October 2014,” he said.

Pemberton was last seen leaving the hotel room where he and Laude checked in last Saturday. Laude was later found dead in the bathroom with strangulation marks in her body.

The US military is in custody of Pemberton in accordance with the Visiting Forces Agreement, which allows US forces to join large-scale combat exercises with Filipino troops and permits the US to take custody of its soldiers who run afoul of Philippine laws.

Leftwing groups and members of the Lesbian, Gay, Bisexual, and Transgender community are asserting the country’s right to have custody of Pemberton.

The DFA has said it would only request for custody from the US once an arrest warrant has been issued by a court, which is expected to take weeks.

But Jose earlier said that “there is no guarantee that they (US) will grant our request.”