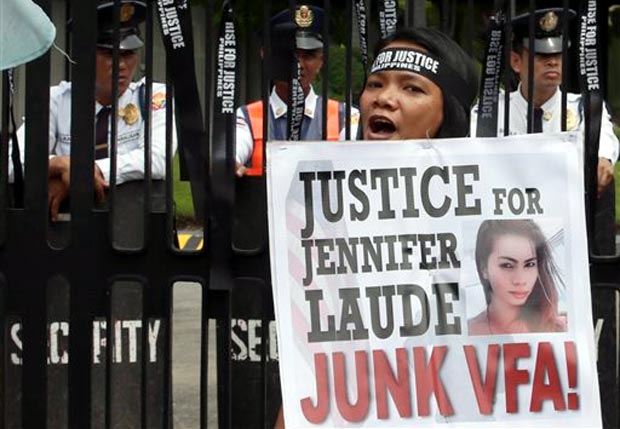 A protester shouts slogans during a rally at the Department of Foreign Affairs to demand justice in the killing of Filipino transgender Jeffrey “Jennifer” Laude with a US Marine as a possible suspect Wednesday in Pasay City. AP

US Private First Class Joseph Scott Pemberton was ordered to answer on Tuesday next week the murder complaint filed against him, Harry Roque, counsel for the Laude family, quoting the subpoena.

“The DFA will serve the summon (subpoena) to the American soldier through diplomatic channel,” he said.

Roque went to the Department of Justice  on Friday  to ask that the three witnesses, including a certain “Barbie,” a friend of Laude, be placed in government’s Witness Protection Program.

Justice Secretary Leila De Lima said the Olongapo prosecutors office assured her that all processes and needed documents have been prepared.

The murder case emerged as security ties were blossoming between the United States and the Philippines. The longtime military allies signed a new accord in April that allows greater US military access to Philippine military camps, and both countries have been vocal critics of China’s expansive territorial claims in the South China Sea.

Activists have renewed calls for the abolition of the Visiting Forces Agreement, which allows US forces to join large-scale combat exercises with Filipino troops and permits the US to take custody of its soldiers who run afoul of Philippine laws. With Associated Press

PH to ask custody of Pemberton once arrest warrant is out