‘Rescue’ operations OKd to save Germans 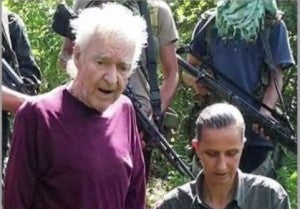 MANILA, Philippines–The local crisis management committee handling the negotiations for the release of two German captives on Thursday gave the go-signal for an all-out “law enforcement operation” against the Abu Sayyaf extremists in Sulu who are holding the hostages.

Col. Allan Arojado, the Sulu island military commander, said Thursday the committee led by Sulu Gov. Abdusakur Tan II approved the launch of the operation by the military and the police to save the lives of the German couple who were abducted while cruising in a yacht off Palawan last April.

“We will not use the word rescue. We prefer ‘law enforcement’ as that will already cover the kidnap victims. The priority is the safe rescue of the hostages,” Arojado said.

“We will do everything not to endanger their lives,” he said.

Lt. Gen. John Bonafos, Armed Forces of the Philippines vice chief of staff, confirmed the preparations being made for the “law enforcement operation.” The military did not say when it would strike the terrorists’ lair.

“We are launching anytime… we are just determining the exact location of subgroup leaders and other ASG (Abu Sayyaf group) members,” said Arojado.

The approval for the operation came a day before Friday’s deadline to behead one of the hostages if the P200-million ransom demand is not paid, Germany does not withdraw its troops from Iraq and Syria and for the Philippines to support the Islamic State militants in Syria and Iraq (Isis).

Viktor Stefan Okonek, 71, a doctor, and his companion, Henrite Dieter, 55, were abducted last April after their yacht broke down off the coast of Palawan. The two were sailing to Sabah.

A spokesperson for Radulan Sahiron, the leader of the Abu Sayyaf faction holding the Germans, said they would execute Okonek at 3 p.m. Friday if their demands are not met.

The AFP has confirmed the authenticity of a video released by the Abu Sayyaf showing German hostage Okonek with his captors inside a “grave site.”

Abu Rami, the Abu Sayyaf spokesman, said that a grave for Okonek has already been dug in case their demands are not met before the deadline.

In an interview with RMN-Zamboanga radio, Okonek said he was pushed into a hole in the ground which he had been told would be his grave.

Cabunoc said that military troops in Sulu have been studying various options to rescue the German couple.

“The AFP is prepared to perform its mandate,” Cabunoc said.

He said the troops, particularly the new arrivals in Sulu, were being instructed on the “cultural sensitivities” in the Muslim areas.

In Malacañang, Communications Secretary Herminio Coloma Jr. on Thursday said the government is doing all it can to obtain the safe release of the German hostages.

“The Philippine government is exerting all efforts to secure the safe release of the German hostages and we will continue to pursue this objective,” said at a media briefing.

Coloma also said that “nothing has changed” in the government’s policy against giving in to ransom demands.

A day before his scheduled execution, Okonek was allowed by his captors to speak to the media.

“I love them very much,” Okonek was allowed to say during a telephone interview last Thursday with Rami.

Rami said: “Okonek wants to speak with his family before we end his life.”

He said Okonek was sitting on “his burial ground” while waiting for the response from his government and from the Department of Foreign Affairs (DFA) that would save his life.

Rami said there would be no extension of the deadline or stay of execution.

“We gave them five months [to negotiate] and they say that this is just propaganda,” he said.

No one from the Philippine government or German government tried to establish contact since they seized Okonek and his companion, he said.

Rami said Okonek was informed about his execution last Tuesday.

He said that on the instructions of one of their commanders, Dielen was separated from Okonek last Tuesday “because we don’t want her to see how we execute her husband.”

He also warned that if government forces launch a military operation, they would immediately execute the two captives.–With Julie S. Alipala, Inquirer Mindanao and Nikko Dizon