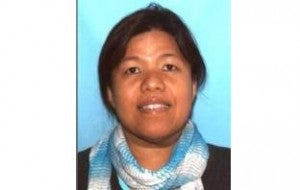 SAN FRANCISCO – Authorities ended the search for missing a Filipino American hiker on Monday, October 13, as her family thanked government agencies and friends who participated in intensive land, sea and air searches for her.

Naomi Alcotas, 34, has been missing since Friday, October 10, when, investigators say, a large wave apparently swept her and boyfriend, Jojo Acosta, also 34, into waters off a remote area of Hanauma Bay in Honolulu. Acosta’s body was discovered in the water later that day, according a report by the Honolulu Star-Advertiser http://www.staradvertiser.com/news/breaking/20141013_Firefighters_suspend_search_for_missing_hiker_off_Hanauma_Bay.html?id=279095281 .

Other hikers found bags belonging to Alcotas and Acosta on a cliff above the Bridge Rock shoreline formation and alerted the Honolulu Fire Department and Ocean Safety, according to the Star-Advertiser.

There has been no further sign of Alcotas despite more than three full days of intensive land, sea and air searches. The Honolulu Fire Department has suspended its search for Alcotas pending further information.