MANILA, Philippines—The Visiting Forces Agreement (VFA) between the Philippines and United States (US) works and the custody of the accused will not matter as long as they will be tried in a Philippine court, the Department of Foreign Affairs (DFA) said Thursday.

“We should bear in mind that if there was no VFA, maybe we won’t even have jurisdiction over this case,” DFA spokesman Assistant Secretary Charles Jose told reporters in a briefing. Jose was referring to the alleged murder of Filipino transgender Jeffrey “Jennifer” Laude by Private First Class Joseph Scott Pemberton.

“Unlike in the previous military bases agreement, [US troops] have total immunity. But with VFA, at least we have jurisdiction [of the case],” he said. 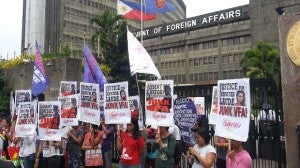 Jurisdiction refers to whose judicial court will hold the trial and which country’s laws will apply while custody means the physical detention of the suspect as the judicial proceedings are ongoing.

Pemberton, charged with the murder of Laude in Olongapo City, is under the custody of the US military on board USS Peleliu docked at the port of Subic.

Various militant groups are outraged that Pemberton is not being detained by Philippine authorities.

Officials of the DFA and Presidential Commission on the VFA (VFACOM) have already said that Article V Paragraph 6 of the agreement states US will have “immediate” custody of any US personnel accused.

Jose said that what is more important is the jurisdiction and the trial of the accused that could result in imprisonment in the Philippines.

“They can be tried in court [and] if convicted, they will serve [their sentence] in the Philippines. That is the more important thing,” Jose said.

“If there was no VFA, maybe Smith would not have been convicted here. He was released because the witness recanted during the appeal. So it’s not the failure of the VFA,” Jose said.

“VFA is working. We have criminal jurisdiction in both cases. Smith was convicted under Philippine laws,” he said.

PH to ask custody of Pemberton once arrest warrant is out