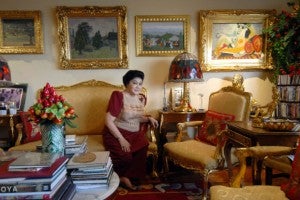 This file photo taken on June 7, 2007 shows former first lady Imelda Marcos is seen in her apartment in Manila with a gallery of paintings including a Picasso, seen at upper right. AFP FILE PHOTO/ROMEO GACAD

MANILA, Philippines–The Presidential Commission on Good Government (PCGG) on Wednesday clarified that the agency created to recover the ill-gotten wealth of the late dictator Ferdinand Marcos and the 9,539 rights abuse victims of the Marcos dictatorship were on different paths as far as the Marcos assets are concerned.

In an interview, PCGG Chair Andres Bautista explained that the PCGG was running after the ill-gotten assets of Marcos and his family while the claimants and its lawyers were after the Marcos estate—and the two are apparently not the same.

Bautista stressed the agency has nothing against the rights abuse victims of the Marcos regime and that he fully supports the idea that they should be compensated.

The agency was responding to an Inquirer special report on the Marcos paintings (Oct. 12 and 13) in which the victims’ lawyer, Robert Swift, said the PCGG had no claim to the Marcos artworks, which the victims have been pursuing to collect on a $2-billion award from a Hawaii court that found the Marcos dictatorship liable for the torture, summary executions and disappearances of about 10,000 people.

Swift was in turn reacting to news reports that earlier this month, sheriffs from the Sandiganbayan antigraft court, at the instance of the PCGG, had raided the San Juan house of the Marcoses and carted off eight works by old European masters.

The Inquirer report said that the PCGG and the claimants and their lawyers were in a race to get to the apparently sizeable Marcos art trove.

Bautista said that part of the ill-gotten wealth are the paintings that were bought by the Marcoses using what is suspected to be money stolen from government coffers during the dictator’s term.

He explained that the 1995 judgment rendered by the US federal grand jury in Hawaii awarding $2 billion to the human rights victims was against the estate of Marcos or assets that the dictator had acquired legally.

“The Supreme Court had previously ruled that the legitimate earnings of the Marcoses from 1965 to 1986 were about $304,000 (about P13 million) so the rest are presumably illegally acquired,” he pointed out.

“On the other hand, the paintings, according to the Sandiganbayan, are part of the Marcoses’ ill-gotten wealth which rightfully belongs to the Filipino people and the republic,” the PCGG chair said.

Asked why the PCGG sought the attachment of the paintings only recently, Bautista said that the agency immediately asked the Sandiganbayan for the seizure of the masterpieces as soon as their whereabouts became known.

He explained that the eight paintings confiscated from the Marcoses’ San Juan home were recently discovered through photographs uploaded on the Internet.

He said they were pictures of Imelda Marcos, the dictator’s widow, in media interviews that she gave at the San Juan house where the paintings could be seen in the background.

“Those are only eight paintings and we are still looking for 144,” Bautista said.

Bautista stressed that the PCGG is fully in agreement with compensating the victims of Marcos’ abuses and “ardently” supports Republic Act No. 10368, the 2013 law providing for a compensation fund of P10 billion to be funded from the Marcos Swiss bank deposits that were returned to the government.