MANILA, Philippines—The killing of Filipino transgender Jeffrey “Jennifer” Laude allegedly at the hands of a US Marine is more than a gender hate crime; it is also about the unequal agreements with the United States that serve to protect their soldiers while on alien soil, a UP Manila professor said on Wednesday.

The two agreements are related, Simbulan said, while the VFA allows US troops visitation powers despite the absence of their own military bases in the country, Edca allows US to set up their own temporary facilities for the increased American troops’ rotational presence.

These agreements serve to protect American troops in case they commit a crime in another country, Simbulan said. 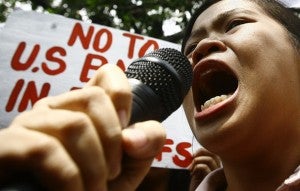 Members of the LGBT community, LFS , Gabriela and other cause-oriented group stage an indignation rally at the US Embassy. The groups condemned Tuesday the killing of the Filipino transgender Jaime “Jennifer” Laude and call on the government to assert the Philippine’s jurisdiction over the crime. JOAN BONDOC

“These agreements give special treatment to the US forces… By giving them special treatment, they’re able to get away with it,” said Simbulan, known for his books echoing anti-American military bases sentiment.

On Saturday, Laude together with a male foreigner checked in at the Celzone Lodge. She was found lifeless on the floor hours later and was believed to have been strangled to death.

The suspect, identified as Private First Class Joseph Scott Pemberton, is held onboard the USS Peleliu while a joint Naval Criminal Investigative Service and Philippine National Police investigation is ongoing.

Simbulan said a crime like murder normally would be subjected under the country’s laws. But with the VFA, a sense of special treatment is granted to the US soldier, he added.

The VFA gives the Philippines jurisdiction over US troops who commit crimes in the country not linked to their official duties. But it also says custody over the Americans remain with the US government except on “extraordinary cases.”

“These issues will all the more highlight the one-sidedness of the agreements we’ve entered,” said the professor, who is also a senior fellow in the Center for People Empowerment in Governance.

Simbulan said Laude’s murder should not be seen as a gender hate crime alone.

He said highlighting Laude’s gender identity shifts the focus on the liability from the suspect to the victim.

“It might be seen as a justification. It’s hinting as if the motive for killing was that the Marine was deceived by the transgender,” Simbulan said in Filipino.

“A human being was killed. We shouldn’t even be talking about sexual preference. She’s a victim,” he added.

Simbulan lamented that such heinous crimes may persist if the unequal relations between the country and the US in terms of military presence remain unresolved.

“It will keep on recurring. There will be more presence of US forces here interacting with our population. These cases, you can expect them to multiply,” he said.

Simbulan is the husband of deceased UP professor and Vera Files trustee Chit Estella-Simbulan, who was killed after a bus rammed a taxi she was riding on Commonwealth Avenue.

This is not the first time a US soldier was accused of a crime while in service in the country.

US Marine Lance Corporal Daniel Smith was accused in the Subic rape case and convicted by a lower court to 40 years imprisonment but an appeals court reversed the verdict after the victim retracted her statement.