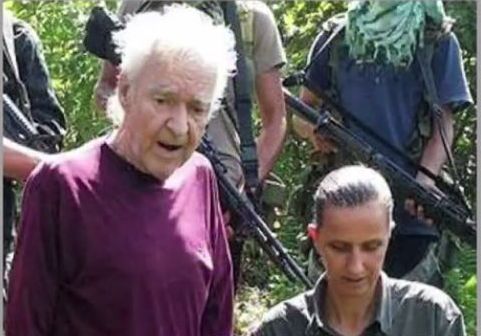 ZAMBOANGA CITY, Philippines – German hostage Viktor Stefan Okonek, who has been threatened with decapitation, said in an interview arranged by the Abu Sayyaf Group with a local radio station here on Wednesday that he had been shoved into a pit where he is to be buried on Friday if the Philippine and German governments do not give in to the terrorists’ demands by then.

Speaking in English by mobile phone to Radio Mindanao Network’s Alarma 900 here, the 71-year-old Okonek said his captors had told him the 1.5- meter-wide and three-meter-deep pit would be his final resting place if things don’t turn out their way.

The bandit group has been demanding P250 million for the release of Okonek and his companion, Henrite Dieter, and for Germany to withdraw support from the multi-nation action against the Islamic State in Iraq and Syria.

“I am sitting here in a hole, a deep hole, three meters by 1.5 meters. They told me this is my grave. They pushed me inside this hole and I am sitting here with 10 men since (last night),” Okonek said, adding he was now “very weak.”

A video provided by the terrorists showed Okonek, whose image was not very clear, being slapped as he was dragged by several gunmen to the pit. He was audibly crying and could be heard saying “Ow” with each blow.

Abu Rami, spokesperson of Abu Sayyaf leader Radulan Sahiron, said the deadline remained October 17 and that Okonek will be buried in the grave if things do not turn out as expected.

“We will bury him if the ransom demand is not met and Germany did not withdraw its support to the airstrike in Iraq and Syria,” he said by phone.

Rami said Dieter had been separated from Okonek.

“We don’t want her to see the actual execution,” he added.

Rami said a video of Okonek’s execution would be posted after Friday.

At the same time, he said, local contacts identified with Philippine National Police Director General Alan Purisima had been trying to negotiate for the release of the captives.

But he said the Abu Sayyaf wanted to talk only to representatives of the Department of Foreign Affairs.

An Inquirer source said Purisima went to Sulu on Tuesday and tried to establish contact with the Abu Sayyaf through local politicians.

But Chief Supt. Noel delos Reyes, the police director of the Autonomous Region in Muslim Mindanao, denied this.

“We have not initiated any talks with the ASG or with any other criminal group nor is there any plan of doing so in the forward periods,” he said in a text message to the Inquirer.