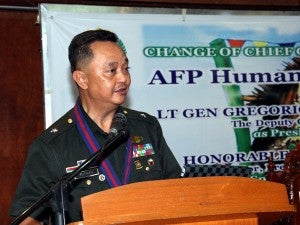 MANILA, Philippines-The Philippine Military on Monday condemned the brutal killing of a Filipino transgender allegedly by a Marine from the United States.

Major General Domingo Tutaan, Armed Forces of the Philippines Spokesman, said the killing of Jeffrey Laude in Olongapo is one condemnable act especially that the alleged perpetrator is a military man himself.

“We are bothered,” Tutaan said. “The act of killing a person is an act that is condemnable.”

According to previous INQUIRER reports, Laude, 26, was supposedly killed inside the Celzone Lodge along Magsaysay Drive in Olongapo City on Saturday.

The United States Embassy in Manila said that a member of the US Marines is one of the suspects in the murder and that it expresses its condolences to the family of Laude.

“The United States Embassy in Manila expresses its deepest condolences to the family and friends of Jeffrey Laude who was found dead in Olongapo City on October 11,” the embassy said in a statement.

Tutaan said that they are in close coordination with the Criminal Investigation and Detection Group with any development regarding the case, but did  not divulge any information regarding the identity of the suspect.

Despite the AFP’s reservation on the matter, a US Navy memo said that a US Marine is detained for the apparent murder of the transgender.

The memo, however, did not identify the suspect who is detained aboard the amphibious assault ship Pelleliu as agents of the Naval Criminal Investigative Service piece together the events that transpired leading to the supposed murder.

The Marine is assigned to the 2nd Battalion, 9th Marines, out of Camp Lejeune, North Carolina and is in the country after participating in the recently concluded Phiblex 15, a bilateral naval exercises between the Navies and Marines of the United States and the Philippines.

US Marine held in slay of Subic transgender–report