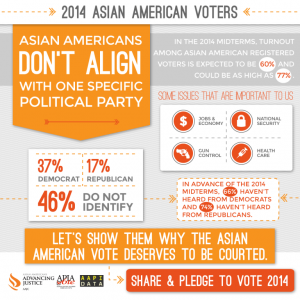 WASHINGTON, DC – New polling released October 7 shows that at least 60 percent and up to 77 percent of Asian American registered voters are planning to vote in the 2014 Midterms.

The polling by Asian Americans Advancing Justice | AAJC and Asian Pacific Islander American Vote (APIAVote) shows that, in addition, 46 percent do not affiliate with a political party, compared with 37 percent that are Democrats and 17 percent that are Republicans.

See infographic for summary of findings.

These results, coupled with the fact that Asian Americans are rapidly growing in population in the Southand Midwest of the United States indicate that this community will be a sought-after political power force in years to come.

“Asian Americans should no longer be an afterthought in our political process,” said Mee Moua, president and executive director of Asian Americans Advancing Justice | AAJC.

“It is clear that Asian Americans will have a say in shaping future elections and the future direction of our country,” Moua added. “Candidates from both sides of the aisle should be making inroads with this community, and yet, most Asian Americans have yet-to-be contacted by either political party. The polling results found that 66 percent of Asian Americans haven’t heard from Democrats and 74 percent have not heard from Republicans.”

In more than 60 House races across the country – in congressional districts in Georgia, New York, Illinois, Minnesota, Maryland, California and Hawaii – Asian Americans make up eight percent or more of the voting-age population, large enough to close the gap in some of these races.

To counter challenges to voting, such as discriminatory voting laws and practices, language barriers, lack of access to voter resources and unfamiliarity with the voting process and political candidates, some Asian American groups are building civic and political infrastructures across the country.

This includes on-the-ground organizing in states like Nevada and Virginia, where in close House races, Asian Americans make up 10 percent more of the citizen voting age population.

“This growing base of Asian American voters remain mostly undecided,” said Christine Chen, executive director of APIAVote. “Many are disengaged from politics because the parties and candidates are not directly addressing them. As many as 64 percent of those surveyed believe politicians don’t care much about what they think. APIAVote and partners have launched grassroots efforts engaging 200,000 households with direct voter contact and we encourage the campaigns to do the same. Our polling indicates what they should already know — these votes are up for grabs.”

“The Asian American electorate is growing rapidly and is already a significant presence in many states and Congressional districts,” said Karthick Ramakrishnan, director of AAPI Data and lead researcher on the survey. “In-language polling of Asian Americans is now getting to be critical, in order for us to have a more accurate picture of what voters care about, and how they will vote.”