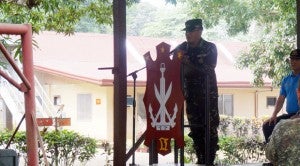 “Thank you very much,” Armed Forces chief General Gregorio Catapang Jr. told reporters in the sidelines after he spoke to troops at the 2nd Marine Brigade Headquarters in Jolo on Sunday.

Singha earlier labeled the Filipino peacekeepers’ escape in Golan Heights as an “act of cowardice.”

This was after Catapang sought investigation on Singha’s supposed orders to Filipino troops to surrender their firearms. The Filipinos refused to oblige and Catapang claimed this decision of Singha put the lives of the Filipinos in danger.

After taking hostage dozens of Fijian peacekeepers in Golan Heights last August, Syrian rebels tried to do the same to Filipino peacekeepers and asked them to surrender their firearms to which they refused. This led to a standoff and a firefight that raged for a few days, but Filipino peacekeepers managed to escape while the rebels were sleeping.

But just this week, Singha lauded the Filipino peacekeepers in Golan Heights that refused to surrender their firearms and engaged with Syrian rebels.

Filipino peacekeepers pulled out two weeks earlier than scheduled last month due to the escalating tension in the region.
“You know we all have our interests. National interest, United Nations interest. So I think all is well that ends well. Bati-bati na lang muna tayo,” Catapang said.

Undof commander was the coward, not Filipino peacekeepers

PH pulls peacekeepers out of Golan Heights ahead of time