Aquino in Bali hails checks, balances in a democracy

BALI, Indonesia—President Benigno Aquino III championed checks and balances in a working democracy, even if running a government without it is tempting as it can get things done faster, in a speech he delivered on Friday before the 7th Bali Democracy Forum.

Mr. Aquino contrasted democratic governments with authoritarian regimes, which, he noted, had victimized his own family.

“It can be said [that] in a totalitarian regime, things get done faster, whether they are right or wrong, precisely because there are no checks and balances in place. Very often, the consent and support of the governed are neither sought nor attained. Naturally, such a regime, one divorced from the desires of its people, will have weak foundations,” he told an audience of foreign ministers and vice ministers from 51 participant countries and 68 international observers.

The President cochaired the forum with Yudhoyono, who is stepping down as Indonesia’s president in 10 days. The annual event functions as a platform for national leaders to exchange views on democracy and its development in their respective countries. It is aimed at fostering dialogue-based cooperation in the Asia-Pacific region through experience and best practices in democracy. 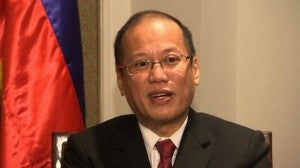 The theme of this year’s edition of the forum is “Evolving regional democratic architecture: challenges of political development, public participation and socioeconomic progress in the 21st century.”

“As leaders, all of us here have had our share of frustrations borne of the many factors that sometimes hinder the realization of our vision. This breeds the temptation to consider an authoritarian method, as this might promise immediate gains,” Mr. Aquino said.

An authoritarian regime would soon collapse, as the opinions and wishes of the people are only second to the objective of staying in power, Mr. Aquino said.

“And as we have seen in history, all authoritarian regimes, regardless of the cause of their coming to power, will at one point make political survival the end-all and be-all of government,” he said.

The President delivered his views on democracy here at a time when he himself is coping with democracy and authoritarian issues back home.

Mr. Aquino has been criticized for flirting with the idea of reelection, which is banned by the Constitution and would necessitate charter amendments.

He has also received flak for openly advocating the clipping of the powers of the Supreme Court, whose “overreach,” he said, was hampering the programs of his government.

In his democracy speech, Mr. Aquino cited his parents, former President Cory Aquino, credited with bringing democracy back to the Philippines after the first Edsa People Power Revolution that brought down the Marcos dictatorship, and his martyred senator-father, Ninoy Aquino, whose assassination impelled the anti-Marcos, prodemocracy movement.

Empowering citizens leads to inclusiveness, stability and development, he stressed.

“Democratic institutions, after all, seek to free and enable its citizens, and the first freedom should always be from hunger, as my father once taught,” he said.

He said the Edsa People Power Revolution that toppled a dictator in the Philippines in 1986 became a defining democratic movement of its time.

People power centers on peaceful determination and not force when responding to intimidation, and a consensus-seeking vision, he said.

In extolling democracy, Aquino brought up the example of his predecessor, Gloria Macapagal-Arroyo, calling her 10-year presidency a “lost decade” for the country.

“(U)nder my predecessor, democratic institutions were compromised and weakened by a culture of transactionalism and impunity, where the very select few rode roughshod over the will and aspirations of the vast majority,” he said.

Mr. Aquino said people power showed itself again when he was elected president in 2010.

In his speech, the President extolled the strong and brotherly relationship of the Philippines and Indonesia, particularly how the two governments have amicably settled a maritime boundaries dispute.

Aquino praised Yudhoyono for moving to settle the maritime dispute with the Philippines, placing it against the backdrop of the territorial row the Philippines is facing with China over areas of the South China Sea (West Philippine Sea).

“With his assuring leadership, our two nations were able to resolve in an amicable manner the issue concerning our maritime boundaries in the Mindanao Sea and the Celebes Sea, thus moving our nations forward with an even deeper trust in each other,” Mr. Aquino said.

“President Yudhoyono’s commitment to the rule of law has likewise been crucial as we advance the peaceful and just resolution of disputes in the South China Sea,” he said.

Amid the worsening row with China, the Philippines has been soliciting support from other countries for its campaign to promote a rules-based approach in the settlement of maritime disputes in the region. Indonesia is one of its supporters.

In May, during Yudhoyono’s official visit to the Philippines, the two signed an agreement ending a 20-year-old maritime boundary dispute.

Indonesia has been the Philippines’ closest ally among the countries in Southeast Asia. The President attributed this to their “common history and heritage as maritime peoples of Southeast Asia.”

He said one of the recent key contributions of Indonesia was its support of the Philippines’ efforts to bring about a just and lasting peace in Mindanao.

Indonesia chaired key committees in the Organization of Islamic Cooperation and was the mediator in the peace talks between the Philippine government and the main Moro insurgency, the Moro National Liberation Front, which led to the signing of a peace agreement in 1996 and the creation of the Autonomous Region in Muslim Mindanao. Indonesia was also part of the international monitoring team in later negotiations between the Philippine government and the separatist Moro Islamic Liberation Front.

“To those who represent the different Asean (Association of Southeast Asian Nation) states here today, all of us know full well that the collective growth of our citizenries may only be fulfilled in a regional context where our shared ideals and individual beliefs are respected by our partners,” Mr. Aquino said.

A representative from China was in the audience, along with hundreds of delegates from the Asia-Pacific region.

The heads of state and governments of the Philippines, Timor-Leste and Brunei were the only ones invited to what is essentially a ministerial-level forum. An exception was the 2012 meeting, when the forum was conducted like a summit and was attended by many heads of states and governments to celebrate the forum’s fifth anniversary.

Aquino back in PH from Bali forum