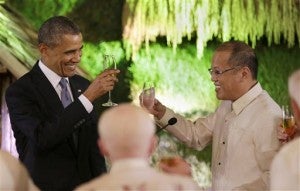 This April 28, 2014, file photo shows US President Barack Obama toasting with Philippine President Benigno Aquino III, right, during a state dinner at Malacanang Palace in Manila, following the signing of the Philippines Enhanced Defense Cooperation Agreement. The Obama administration is still chipping away at its grand plan for a rebalance to Asia that began within months of Obama taking office in 2009, when the US signed a cooperation treaty with the 10-nation Association of Southeast Asian Nations. AP PHOTO/FRANCIS R. MALASIG

WASHINGTON—A military agreement with the Philippines and easing an arms embargo against Vietnam show the Obama administration wants deeper security ties with Asia, even as turmoil in the Mideast has undermined its hope of making Asia the heart of its foreign policy.

The “pivot” was intended to be US President Barack Obama’s signature push in foreign affairs. As the United States disentangled from wars in Iraq and Afghanistan, it would devote more military and diplomatic attention to the Asia-Pacific region and American economic interests there.

The world hasn’t turned out as planned. Washington is grappling with the chaotic fallout of the Arab Spring, a growing rivalry with Russia, and the alarming rise of the Islamic State group that is prompting the United States to launch air strikes in Iraq and Syria.

Against this chaotic backdrop, the growing tensions in the South and East China Seas and US efforts to counter the rise of an increasingly assertive China appear peripheral concerns. The pivot gets few people excited in Washington these days.

Obama didn’t even mention it in a sweeping foreign policy speech in May, and negotiations on a trans-Pacific trade pact—the main economic prong in the pivot—have been mired by differences between the United States and Japan over agriculture and auto market access and by opposition to the pact among many of Obama’s fellow Democrats.

But the administration is still chipping away at its grand plan for a rebalance to Asia that began within months of Obama taking office in 2009, when the United States signed a cooperation treaty with the 10-nation Association of Southeast Asian Nations (Asean).

The United States has since ended its decades-long isolation of Burma (Myanmar) in response to democratic reforms there.

It has taken a more strident diplomatic stance against Chinese aggression in the South China Sea and some concrete steps to shore up its allies’ ability to respond.

In April, the United States signed a 10-year agreement to allow thousands of US troops to be temporarily based in the Philippines, 20 years after US bases there were closed.

Like the Philippines, Vietnam has been engaged in standoffs with China over disputed reefs and islands.

Tensions spiked between May and July after China deployed a deep-sea oil rig near the Paracels, a group of islands within Vietnamese waters.

The vessels of the two sides rammed each other near the rig, and there were deadly anti-China riots in several industrial parks in Vietnam.

On Thursday, the US state department announced it would allow sales, on a case-by-case basis, of lethal equipment to help the maritime security of Vietnam—easing a ban that has been in place since communists took power at the end of the Vietnam War in 1975.

The United States won’t be rushing to Vietnam’s defense, nor does it want to be directly involved in negotiating the territorial disputes themselves, that also involve Brunei, Malaysia and Taiwan.

But Washington says it has an interest in the maintenance of peace and stability and equipping nations to defend themselves and deter aggression.

Hanoi welcomed the step, saying it would promote the US-Vietnam partnership.

It was opposed by rights activists, unpersuaded by Washington’s argument that Hanoi has shown some improvements on human rights and would be encouraged to make more.

John Sifton, the Washington-based Asia advocacy director for Human Rights Watch, said Vietnam’s changes have been superficial and contended that the United States is reversing decades of policy for marginal strategic benefit.

Can it become reality?

Republican Sen. John McCain, who is an archcritic of the Obama administration’s foreign policy but supports the rebalance and pushed for the easing of the Vietnam ban, said it would strengthen defense cooperation to the benefit of both countries.

But McCain foreign policy adviser Chris Brose said the United States still had to convince Asia that the rhetoric of the pivot could become reality.