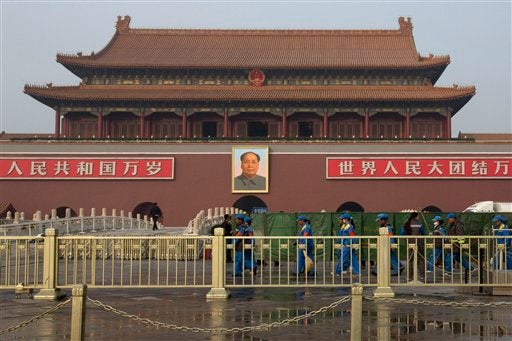 BISHKEK, Kyrgyzstan—The annual congress of the International PEN (Poets, Playwrights, Essayists and Novelists)—a global group of writers including Nobel laureates—has condemned Beijing for human rights abuses and for banning the languages and literatures of the Tibetans and China’s Uighur minority.

Along with the prodemocracy student protests in Hong Kong, the PEN’s condemnation was the closest to be made against Beijing, geographically speaking, as Bishkek is right beside the China-Kyrgyzstan border.

Closing their 80th congress on Thursday, more than 200 writers from 40 PEN centers around the world condemned China for sentencing Uighur writer-scholar and PEN member Ilham Tohti to life imprisonment for alleged separatism.

The writers’ congress likewise condemned China for banning the teaching of Tibetan and Turkish, which the Uighurs speak, in Tibetan and Uighur schools.

PEN has had among its members such renowned writers as Mario Vargas Llosa of Peru, Toni Morrison of the United States, the Nadine Gordimer of South Africa, François Mauriac of France and Thomas Mann of Germany.

Tohti was a lecturer in economics at Minzu University in Beijing and was running a popular online publication on Uighur affairs when he disappeared last January in Beijing.

His wife received a notice a month later that he was being held incommunicado in Xinjiang thousands of kilometers away on “separatism charges.”

In detention, the PEN congress resolution said, Tohti was tortured and cruelly treated with his legs shackled and denied food.

Last month, after a two-day trial, Tohti was sentenced to life imprisonment. All his property was confiscated and his family was thrown out of his house.

To symbolize Tohti’s absence from the PEN congress as a result of his imprisonment, an empty chair was reserved for him in front of the delegates. Writers signed their names on his portrait sitting on the chair to express their solidarity.

Two other empty chairs were reserved for Azimjon Askarov of Kyrgyzstan and Vladimir Kozlov of Kazakhstan. Like Tohti, PEN said the two Central Asian writers had been imprisoned on what it believed were trumped-up charges for their writings against state corruption and abuses.

Tohti, according to Canadian philosopher and fictionist John Ralston Saul, president of the PEN, has opposed violence while being critical of the “increasingly heavy-handed” way in which Beijing has been dealing with the Uighur unrest over Chinese economic and cultural policies in the region.

The Uighurs are a Turkish ethnic group living in Central Asia in what historically has been referred to as East Turkestan or Uyghuristan. Their territory was annexed in 1949 by China, which set up the Uyghur Autonomous Region in the People’s Republic of China.

China has encouraged its majority Han population to migrate to Uighur while also compelling Uighur women to leave the region and work as migrant workers elsewhere.

The policy has been widely condemned as a form of social engineering much like Beijing’s policies in occupied Tibet, where Han Chinese have taken over and exploited the country’s resources.

China, PEN declared in its resolution, “has systematically abused its state security laws to stifle the right to freedom of expression of the Uighur people. in violation of the Universal Declaration of Human Rights.”

PEN likewise took China to task for the arrest of and the prison sentences imposed on Tibetan writers Tsultrim Gyaltsen and Yonggyal, who were convicted for protesting the ban on Tibetan language and studies in Tibet schools.

PEN called on Beijing to hold a dialogue with the Dalai Lama, the exiled leader of Tibet.

Lobsang Chokta of the Tibetan Writers Abroad PEN welcomed the resolution, noting that China is perpetuating what scholars and critics have called “cultural genocide” against Tibet and its language, its Buddhist religion and heritage.

In another resolution, the PEN condemned the Russian Federation for its increasing crackdown on dissent and freedom of expression as a result of its annexation of the Crimea.

Other resolutions took note of the worrisome and even dangerous condition of writers and journalists, and their exercise of freedom of speech in Cuba, Mexico, Vietnam, Ethiopia, Iran, Tibet, Honduras, Syria, North Korea and Turkey.

The writers congress also criticized the increasing use by states of electronic surveillance of their writers and citizens in the United States, United Kingdom, Canada, New Zealand, Australia, Ethiopia, Vietnam and China.

In a touching moment, the congress observed a moment of silence for PEN members who have passed away, including Gordimer, the South African antiapartheid novelist who was at one time the group’s international vice president.

Ralston Saul called Gordimer “one of the defining voices of PEN in the modern era, combining creativity, ethics and the resolve necessary to stand up to racism and authoritarianism.”

Canadian writer Yann Martel, author of the international best-selling novel “The Life of Pi,” noted how books and love of reading foster community and the defense of human rights.

“In defending (imprisoned Kyrgyzstan writer) Askarov, Askarov can defend me,” he said. “I defend Askarov because we have built this community. And so to build a community, have a book by your bedside.”