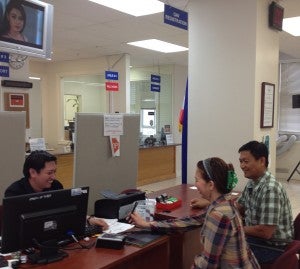 SAN FRANCISCO – Due to Rosy figures in the ongoing registration of overseas voters for the 2016 national elections, SanFrancisco consular officials are optimistic that they would even surpass projections in record-breaking fashion.

Now, if only those who registered would actually turn out in the coming Philippine elections, it would really be good news.

Recent numbers indicate that as of August 15, San Francisco has registered about 4,396 voters from May 6. This monthly figure was surpassed only by some foreign- service posts: Riyadh 7,136; Dubai 5,602; Abu Dhabi 4,766.

By region, foreign-service posts in the Middle East and Africa (MENA) scored the most number of new registrants at 20,079, more than half of the total, while the Americas followed with 7,242, Europe at 4,278 and Asia Pacific at 3,420.

“The August tally shows that we (San Francisco area) are around 25 percent of our target of 17,000 registrants while it is still early to next year’s October 31 deadline,” beamed Consul Reginald Bernabe, head of the SF consulate voter registration team.

Bernabe explained that the word “absentee” has been omitted in the official reference to overseas voters to indicate that overseas Filipinos are not really absent as far as participating in the electoral process is concerned.

As the Department of Foreign Affairs-Overseas Voting Secretariat (DFA-OVS) official release stated, the trend in San Francisco reflects the overall positive response of overseas workers worldwide as registration increased by more than 50 percent for the month of August over the July numbers.

The one million mark was also surpassed last June for the first time in 11 years of overseas voting in the Philippines and as of September 5, the total number of voters is at 1,076,524.

DFA Office of Civil Security and Consular Concerns and concurrently Chairman of DFA-OVS Undersecretary Rafael Seguis is excited by these developments.

“At the current pace of registration, we could have an overseas voter stock of over two million for the 2016 presidential elections and attaining this goal is definitely a game changer,” Seguis said in a press statement.

Reportedly, the DFA Foreign Service Circular to integrate the renewal of passport with registration of new voters also helped in the increase registration.

Another reason given by Bernabe was the removal of the requirement for the execution of an affidavit of intention to return to the Philippines, a controversial issue].

Even as Department of Foreign Affairs (DFA) Secretary Alberto del Rosario remarked that the preparations by the DFA and the Commission on Elections as reasons for the initial success of the registration campaign, Bernabe praised the collective effort of the leadership and staff in embassies and consulates towards their goals.

“We are always calling out to Filipinos everywhere to participate, to exercise their right to vote by registering first. Filipinos are urged to be a part of the process of enjoying the gains of the country by being able to choose their leaders,” Bernabe explained.

While the SF consulate is considered far by those in the states towards the east coast, outreach missions are being conducted periodically to serve those in the faraway places

These missions are coordinated with local Filipino community groups that provide the venues and are done in two or three-day weekends depending on the expected turnout.

Among the places they held outreach missions to recently are Anchorage, Juneau and Fairbanks in Alaska, Aurora and Colorado Springs in Colorado, Murray in Utah, Tacoma in Washington and a regular monthly third Sunday outreach mission at the Season’s mall in Milpitas that serve the many Filipinos in the south bay.

“After California, the most populous Filipinos community is Washington state and of course, Alaska. Just in Anchorage alone we have 12,000 Filipinos. In Kodiak Island with a population of 13,000, there are 3,000 Filipinos. We have a sprinkling in Montana and quite a number in Colorado,” shared Bernabe.

In reaching out, the consulate also conducted field mobile registration that they call akyat barko (climb the ship) to take advantage of registering seamen while they are docked.

Unfortunately, despite increasing registration, not all who registered actually voted in the last election showed.

“We hope we can encourage them to actually vote this time around. They think nothing much has improved in Philippine politics, that is has just been the same thing,” rued Bernabe.

“Some do not like politics, or the politics in the Philippines, while some do not like to vote like those (naturalized American citizens) who do not vote even in the elections here in the U.S.”