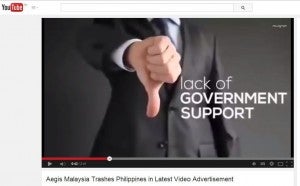 MANILA, Philippines – The Philippine Embassy in Malaysia has sought an explanation from Aegis Malaysia regarding a viral video advertisement that shows the Philippines as a bad place for international companies to invest in compared to Malaysia.

“The Embassy in a letter conveyed its deep concern about this matter, as it considers Malaysian companies as friendly and active partners in furthering bilateral and regional trade and investment,” the embassy said in a statement released Monday.

“The Embassy also sought an explanation or clarification from the Aegis Malaysia management on the release of the video, and on the steps they plan to undertake to address the issue,” it said.

The 3-minute video advertisement shows Malaysia as a better investment decision over the Philippines, which faces natural disasters such as typhoons and earthquakes because of its location in the Pacific Ring of Fire.

It also cites “inadequate infrastructure, an unfriendly climate, less security, and lack of government support,” as factors that investors should consider.

“The video is circulating in social media and has raised alarm among netizens. Based on reports, Aegis Malaysia has pulled out the video and only rogue copies are circulating,” the Embassy said.

“The Embassy assured potential investors that the business environment in the Philippines has remarkably improved, and that the Philippine Government is working tirelessly to further enhance the ease of doing business for each and every investor,” it said.

The full video can be seen here:

Below is the transcript of the narration of the video advertisement.

“Expansion and growth are words of importance in the present times. When companies look to grow and expand geographically, they make a decision. A choice of where they want to see themselves next in the global map.

“Making that choice isn’t easy, it never was. Because after all the hard work that the process entails, the last thing you might want to have is a not so supportive business environment at the place where you choose to be.

“An environment where there is inadequate infrastructure, an unfriendly climate for smooth operations, less security, and lack of government support. An environment that might hinder your interactions with clients, customers, and partners.

“To make things worse, the place could be falling in the Ring of Fire, thus being prone to natural disasters like typhoons, cyclones, etcetera, impacting the operation of businesses and bloating up the cost of living.

“For the same reason, Malaysia is becoming a preferred alternate to the Philippines and is fast emerging as the ultimate investment destination for multinationals, boasting of a world-class infrastructure that not just oversees the future but also houses innovative spaces and systems that blend tradition and technology.

“Malaysia is investor-friendly, owing to flexible policies of the government and less bureaucracy, making processes easy, and administrators accessible.

“The places is not just stable when it comes to governance but also in terms of its climate as its tropical temperature makes Malaysia a safer zone.

“Being a country rich in diversified cultures, natural resources, competitive talent pools, and leisure lifestyles, Malaysia is the perfect balance of business and pleasure.

“Aptly complemented with the availability of best-skilled talent which is customizable to business needs. That’s why we at Aegis have created a Malaysia stronghold that enables us to offer multi-lingual capabilities along with differentiated and hospitable services to global giants.

“This also lets us be a part of Malaysia’s drive of becoming a developed digital economy by 2020. Because we understand that how you grow depends on who you grow with.”