There’s a kulintang in my electronic dance music 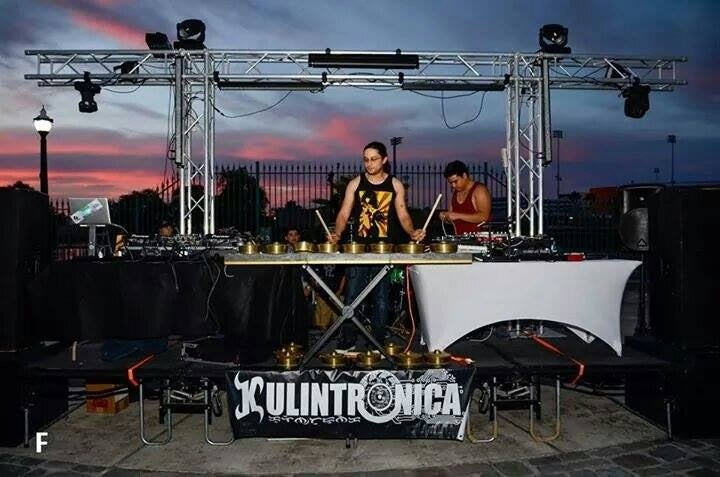 SAN FRANCISCO — Recognized as a San Francisco Bay Area artist who is fusing the “kulintang,” a venerable Filipino instrument, with electronic dance music, Ron Quesada is touring this year to make Kulintronica the next big thing in the EDM genre.

Quesada of Kulintronica, a one-man electronic dance music icon, has played several instruments, starting out with the piano. He used to play the keys with “annoying sounds” until he had his formal lessons when he was eight. Five years of learning led him to performances in Los Angeles and Monterey.

“Our family has a well-established background in the entertainment industry in the Philippines. It wasn’t long until I realized that I would go that route,” Quesada said.

“Among all three siblings he’s the “makata” (poet), and I’ve always supported him to succeed in music,” said his mother, Evangeline Quesada, who was also his first artistic influence. “That was our special bonding together.”

As he explored the music world, Quesada eventually became a guitar player and a bass player, influenced by rock and roll uncle, Tim Quesada. He played with several bands in the Bay Area bar gigs.

“It was all rock and roll. I used to be known to jump off the stage during guitar solos. The biggest break I had was during the Earth Day Festival in Concord in 1998,” Quesada said.

In 2000, Quesada was invited to be part of the rondalla workshop organized by the UP Alumni Association in UC Berkeley. He began performing with the rondalla group, which ignited his interest in different Philippine ethnic instruments.

“I was still playing at bars at that time but for some reason, it felt like it was more fulfilling hitting gongs and playing bamboos,” Quesada said.

He then started collaborating with other artists within the San Francisco Bay Area through a Filipino American and contemporary tribal arts organization—Kularts. He did several projects with them including pieces “Pulse of Desire” and “Lalawigan.”

“Ron has an open mind and heart in music. He has always been open to new things and new creations and he’s very independent,” Kularts Executive Director Alleluia Panis explained.

The curiosity never left him, and he finally decided to take ethno-musicology at San Francisco State University where he met Danongan “Danny” Kalanduyan, the singular expert in Southern Philippine music in the United States.

As Kalanduyan’s student he eventually became an apprentice, working hard to be his teacher’s assistant. “I made sure I was never absent on any of his lectures and rehearsals. Shortly after, I joined his group (Palabuniyan) and toured with them,” Quesada recalled.

It was a life changing experience. “I secretly fused kulintang with different mixes and electronic beats. I know Danny wouldn’t like it because he was all about preservation. But eventually, he supported my work and has become a welcoming presence in most of my performances,” he said.

Soon after, Quesada came up with the name Kulintronica and started performing under that name around San Francisco. He started off with Filipino festivals and eventually went through several tours.

“Kulintronica” combines “Kulintang” and “Electronica” as Quesada intends to reach younger music enthusiasts through electronic music while educating the community about the indigenous instrument. During performances he explains the instrument and gives snippets on arts and culture in Southern Philippines.

In late 2013, he released his first single “Calling My Name,” working with Filipino American vocalist Kristin Sinajon. Not long after, he produced his second single, “Release Me.”

The single “Release Me” was picked up by King Street Sounds and has been heard on local New York radio. He is scheduled to release his first album end of this year and is planning a tour in the Philippines early 2015.

Kulintronica will be performing at the Festival of Philippine Arts & Culture in Los Angeles in October.