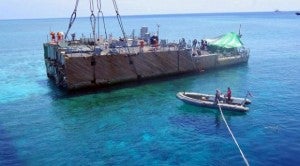 This undated handout photo released on March 30, 2013 by Philippine Coast Guard (PCG) shows the stern of the USS Guardian before being lifted by a boat crane during its salvage operation at Tubbataha reef, in Palawan island, western Philippines. AFP FILE PHOTO/PCG

MANILA, Philippines – Even after the Supreme Court denied the petition for a writ of kalikasan against the United States (US), the Department of Foreign Affairs (DFA) said it would continue to pursue compensation for the damage on Tubbataha Reef caused by a US Navy ship.

“We will continue our ongoing discussions with the US government on the matter of securing full compensation for the damage caused to the Tubbataha Reef,” the DFA said in a statement Wednesday.

The high court said in its unanimous decision that it has no jurisdiction over the case but that the US was still liable under United Nations Convention of the Law of Sea (Unclos).

More than 2,300 square meters of coral reefs at the Tubbataha Reefs National Park, a UNESCO World Heritage Site, were damaged when the USS Guardian ran aground last January 2013.

The US cut the ship into pieces so it could be removed from the reef without causing further damage.

US Ambassador to the Philippines Philip Goldberg said in a recent event that they were set to make an announcement regarding the compensation “very soon.”

In the Know: Writ of kalikasan–Proudly Filipino

Read Next
Teach for the Philippines: Teacher training through an exchange mentoring program
EDITORS' PICK
SMDC The Good Guys on the Go
COOCAA TV Bounce Back Sale offers up to 50% off
Following WHO advice, Philippines resumes hydroxychloroquine trials
WHO resumes hydroxychloroquine coronavirus trials
Cherry Mobile teams up with Cloud Panda PH, launches online store
DOLE eyeing P20-B subsidy for MSMEs
MOST READ
Philippines’ youngest survivor of COVID-19 dies
Piolo gets first call slip from ABS-CBN to resume ‘ASAP’ taping
It’s final: Anti-Terror Bill now only needs Duterte’s signature
‘She had no right to be in Singapore’: Youth pleads guilty to abusing Filipino maid
Don't miss out on the latest news and information.