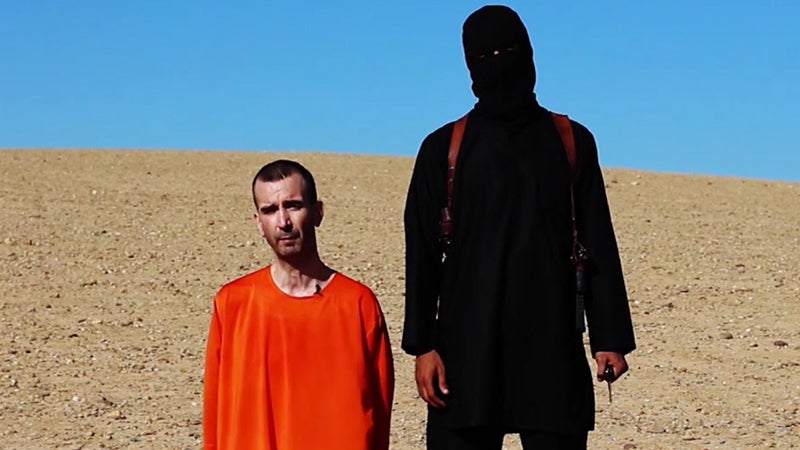 This image made from video posted on the Internet by Islamic State militants and provided by the SITE Intelligence Group, a U.S. terrorism watchdog, on Saturday, Sept. 13, 2014, purports to show British aid worker David Haines before he was beheaded. The video emerged hours after the family of Haines issued a public plea on Saturday urging his captors to contact them. The 44-year-old Haines was abducted in Syria in 2013 while working for an international aid agency. (AP Photo)

MANILA, Philippines–The Department of National Defense (DND) has condemned the beheading of a British aid worker, whose group had given assistance to local communities hit by Super Typhoon “Yolanda” last year.

In a statement, DND spokesman Peter Paul Galvez expressed the agency’s deepest condolences to the family of David Haines of ACTED, who was beheaded by rebels affiliated with the Islamic State of Iraq and Syria (Isis).

“The DND expresses in the strongest terms its condemnation of Haines’ murder at the hands of Isis. The DND, its officials and staff, condole with Mr. Haines’ family and loved ones, and ACTED,” Galvez said.

ACTED was one of several foreign aid agencies that conducted relief operations to help survivors of Yolanda in November 2013.

Haines, however, was not part of the mission then since he was kidnapped in Syria in March 2013.

Galvez said ACTED “rapidly came to the aid of the people of Central Visayas in the aftermath of Yolanda.”–Julie M. Aurelio