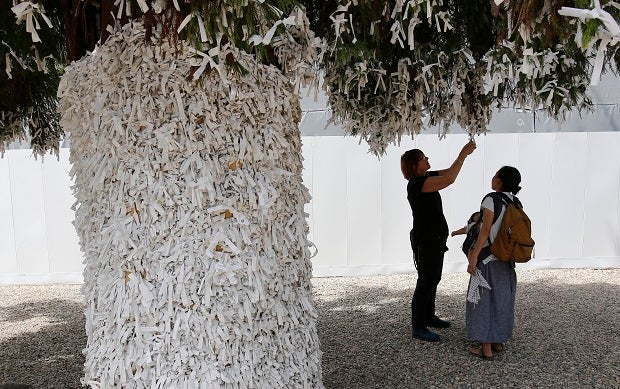 In this photo taken Tuesday, Sept. 9, 2014, a family ties a written oracle to a branch of a tree at Izumo Grand Shrine in Izumo, western Japan. The shrine is one of the most ancient and important Shinto shrines in Japan, dedicated to the deity of marriage. AP/Shizuo Kambayashi

MANILA,  Philippines–A new index ranks Japan as the most efficient among Asian countries in turning the building blocks of creativity into tangible innovations that benefit their economies and people while Myanmar, Pakistan and Cambodia are least efficient.

The Asian Development Bank said Friday it developed the index with the Economist Intelligence Unit to give policymakers a tool to assess how best to foster innovation and creativity in Asian economies.

Finland and the United States were included for comparison and ranked second and 4th respectively out of the diverse group of 24 countries that span some of the richest and poorest nations in the world. South Korea was third and China was 11th ranked.

The index uses 36 indicators to measure capacity and incentives for innovation, including how many global top 500 universities a country has, the urbanization rate and spending on research and development. The number of patents filed, value added to agricultural commodities and the number of books and films produced are among eight indicators of creative production used.

Singapore topped rankings for strong political institutions, protection of intellectual property and contract enforcement while Hong Kong was best in terms of creative production, reflecting a high level of export sophistication and its prolific film industry.

Innovation in service industries such as medical diagnostics, architectural design, and business accounting holds promise for Asia, according to a separate ADB report also released Friday.

It said Asia’s developing economies need to boost investments in higher education and training, innovation, information and communication technology and in improving their economic institutions to allow them to jump beyond middle-income levels,