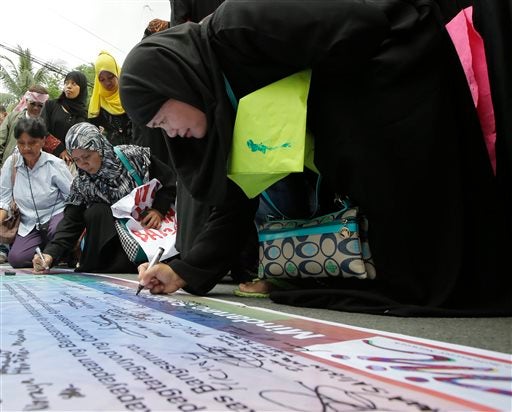 Filipino Muslims affix their signatures on a mock covenant during a rally near the Presidential Palace in support of the Bangsamoro Basic Law draft that was formally submitted by Philippine President Benigno Aquino III to both houses of Congress Wednesday, Sept. 10, 2014 in Manila, Philippines. AP

MANILA, Philippines — The president of the overwhelmingly Catholic Philippines proposed Wednesday to give Muslims in the south the ability to run their own government under their own flag, part of a peace plan aimed at ending a four-decade rebellion that has killed 150,000 people.

The autonomous region in the southern island of Mindanao, to be called Bangsamoro, would get its own 60-member parliament that would wield exclusive power over such areas as agriculture, trade, tourism and education.

Under the proposal, Islamic Shariah law would apply to Muslims in the region, but the country’s justice system would continue to apply to non-Muslims. The Moro group has renounced the terrorist acts of extremist groups, including the Islamic State, which seeks to impose a harsh version of Shariah law in areas under its control in Syria and Iraq.

But at least three smaller Muslim rebel groups oppose the autonomy deal and have vowed to fight it.

The autonomous zone, which generally covers five provinces, would replace an existing one, seen as a dismal failure. The new plan grants much more autonomy to the region, and Aquino’s government also has promised to pour 17 billion pesos ($389 million) in special development funds over the next five years into the region, which has been stunted economically due to the conflict.

The rebels have been fighting since the 1970s for Muslim self-rule in Mindanao in an insurrection that has killed about 150,000 combatants and civilians. The United States and other Western governments have backed the autonomy deal partly to prevent the insurgency from breeding extremists who could threaten their countries.

The peace accord and the draft law came after 13 years of tough negotiations.

The United Nations office in the Philippines praised the development as a “critical milestone” and “a crucial achievement in ensuring lasting peace and sustainable development in Mindanao and in the wider Philippines.”

The new region will also get larger revenue shares, including 75 percent of national taxes, fees and charges collected by the government in the Bangsamoro. The current Muslim region gets 70 percent of those taxes.

The bill is expected to come under intense scrutiny in parliament, but it is eventually expected to pass given that both Congress and the House of Representatives are dominated by Aquino’s allies. The bill may face legal challenges from Christian politicians and groups, which are wary of ceding territory, power and influence to Muslims.

In 2008, the government and the rebels were close to signing a preliminary peace deal but Christian politicians questioned the legality of the pact, which eventually fell apart, igniting rebel attacks. Fighting resumed, killing scores of people and displacing tens of thousands of villagers.

Filipinos have grown exasperated with the fighting in the south, so some politicians are reluctant to be seen opposing the plan, said analyst Ramon Casiple.

“This isn’t a partisan issue,” Casiple said. “If you go around saying you’ll block this, a stance the public fears would lead to war, I don’t think you’ll get support from the people.”

Bangsamoro bill to face rough waters in the House of Representatives