Rehab work goes on in Bantayan 10 months after ‘Yolanda’ 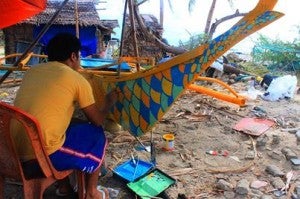 BANTAYAN ISLAND, Philippines — In two months, it will be a year since Super Typhoon “Yolanda” struck but survivors are still struggling to move on in the town of Santa Fe.

Santa Fe Mayor Jose Esgana admitted recently that they have yet to receive enough assistance from the national government.

Non-government organizations and international institutions have been flexing their muscles to help Yolanda-stricken areas including the fourth-class town of Santa Fe.

Prudence Foundation, the charitable arm of British insurer Pru Life UK and Prudence Corporation Asia, has started to construct 135 houses in the village of Maricaban. They have also provided livelihood by donating 183 motorized boats with fishnets and 140 pedicabs.

The foundation has committed $2 million worth of assistance as part of support and recovery efforts for Yolanda victims.

“The concept behind this project is really simple: Have basic housing in disaster prone areas. It’s very dangerous to rebuild in disaster prone areas so organizations collaborate and coordinate with right government officials, find safe lands and put safe housing which are disaster resistant houses and offer people who don’t have money the opportunity to live in a good house which is theirs,” said Marc Fancy, Prudence Foundation Executive Director.

The houses to be constructed would be able to withstand a magnitude 8 earthquake and winds of up to 275 kilometers per hour.

Yolanda, the strongest typhoon to hit land in recent world history, pounded Central and Eastern Visayas last November 8, 2013. It made its fourth landfall in Bantayan.

About 80 employee-volunteers from 12 countries joined the field work to help construct the houses. The project started in March and more than 100 PruVolunteers participated in the construction and relief work then. It is expected to be completed in less than two years.

“We had the privilege to come back again with a new group. You see the progress, the site it’s beginning to take shape. Its’ amazing and words are very hard to express,” Fancy said.

Prudence Foundation have also gathered its employees in Asia in the past in post disaster zones such as building schools in Sichuan, China after  an earthquake which killed about 70,0000 in 2008; rebuild homes following an strong earthquake in Padang, Indonesia in 2009; clear debris and support children in the 2011 earthquake in Ishinomaki, Japan; and repair homes in 2012 after widespread flooding in northern Thailand.

“Not everyone is a physical person but you have seen our volunteers all shapes and sizes, all nationalities. Everyone wants to help. They are learning new things… In building houses we split tasks, people rotate. They get to try new things. Obviously some people work harder than others. People take it easy but the work is very honest and genuine,” Fancy said.

“I really wanted to get out of my comfort zone so I decided to go for it. I come from the city and I have never done this kind of thing,” she said.

“I think it’s time. I’m 25 and I should do something like this at least once. It makes you know how you can push yourself. I can do more than what I thought I could. And meeting more people, the locals are really friendly,” she said.”

Bantayan still not getting enough help from government