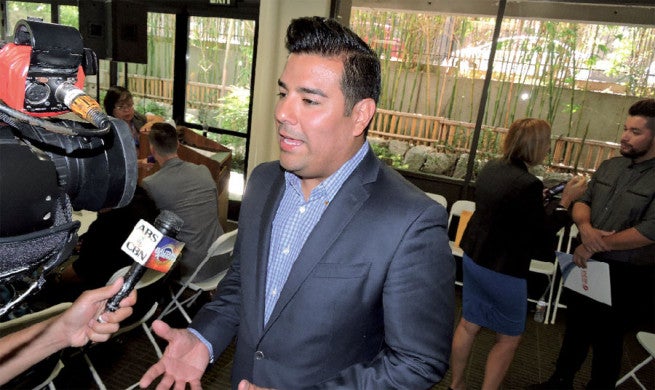 • New levies on driver’s licenses, remittances on the table

An expanded Medi-Cal and an insurance marketplace for undocumented immigrants, will need funding, according to State Senator Ricardo Lara (D-Huntingon Park/Long Beach), the primary author of Senate Bill 1005 or the Health For All Act.

The imposition of new fees is being debated by bill proponents, Sacramento policy makers and think tanks, who are trying to find ways to make Health For All a fiscally sound program.

But Lara clarified that these fees are still theoretical at this point, and are not yet considered as the “ultimate solution” to make the Health For All program work. Lara made the clarification during an ethnic media roundtable hosted by New America Media on Friday, September 5.

“There’s no set fee now. We’re just in the discussion phase. We’re trying to figure out how much money we’re actually going to need to be able to fund this exchange and the expansion of Medi-Cal,” Lara said.

Lara, who is joined by a broad and diverse statewide coalition of health, immigrant and community advocates in the push for Health For All, said that it is “tricky” to figure out how much money this program is going to cost.

Lara, however, also went on to say that a majority of California voters polled agreed that the added fees were a good idea.

“Again, we have to be very mindful and careful. Like you said, it props up the Philippine economy. Remittances in some of the Mexican states, that’s their number one economy too. So we have to be very careful. But we also have to figure out and be honest with ourselves on how we’re going to get this paid for. It’s about finding that delicate balance,” Lara conceded.

Relevance of ‘Health For All’

Lara introduced SB 1005 in February 2014. It will effectively extend eligibility for Medi-Cal benefits to low-income undocumented California immigrants who would qualify for the assistance, had it not been for their immigration status.

The bill also proposes the creation of a statewide health benefit exchange program where all Californians, regardless of immigration status, can receive health care coverage.

In a statement issued after the bill’s introduction to the State Senate, Lara pointed out that the federal health care reform, the Affordable Care Act, specifically excluded undocumented immigrants from insurance coverage provided through the statewide health care exchange, Covered California.

In spite of the ACA being in place, it is projected that about three to four million people in California remain uninsured, and about one million of those are undocumented residents ineligible for coverage.

Health For All Act, Lara said, would save the state money in the long term. It would also allow California to have healthier communities, he said.

As it stands now, a lot of families have mixed households, where some members have health insurance, and some don’t due to their immigration status.

“I think it’s fair for us to cover everyone and ensure that everybody has the ability to live a healthy life in California,” Lara said.

With California being considered as a trendsetter state in terms of progressive legislation, Lara said that it is important for California to take the lead on this issue.

Lara praised Rob Bonta, the first Filipino-American Assemblymember, for being Health For All’s advocate in the State Assembly. Bonta is co-sponsoring the bill’s Assembly version.

“Assembly member Rob Bonta has been absolutely amazing in this effort. He is a true champion, not only of our Pinoy community, but of every Californian,” Lara said.

As men who grew up in immigrant families and who went on to become leaders in shaping public policy, Lara said that he and Bonta were perfect examples of the American Dream.

The State Senator promised that he and Bonta would continue to work together and ensure the passage of SB 1005, for the sake of every undocumented person in California.