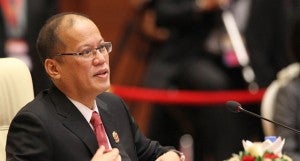 MANILA, Philippines – Malacañang was not fully convinced with the opinion of an American executive that President Benigno Aquino III should seek re-election.

“While we note Mr. (Daniel) Wagner’s view that ‘…(if President) Aquino does not run, win, and serve a second term, the country risks losing its hard won gains…,’ we wish to emphasize that what remains essential to the President is to know the sentiments of his bosses, the Filipino people, on how to ensure that the reforms and transformation that he has begun will continue and will become permanent,” Communications Secretary Herminio “Sonny” Coloma Jr. told INQUIRER.net.

Daniel Wagner is the chief executive officer of US-based Country Risk Solutions. His article “Can the Philippines afford a single Aquino term in office?” was published in Huffington Post Tuesday.

Wagner said the Philippines could not afford to backtrack and that Aquino stepping down in 2016 may result in the undoing of many reforms.

While it was not the first time that Palace mentioned the need to listen to what the people want, in the past such a comment was interpreted as being open to the possibility of a term extension by amending the Constitution.

Calls for Aquino’s re-election or term extension were first monitored online with netizens posting “One More Term” photos on Aquino’s official Facebook page. It was bolstered by Interior Secretary Manuel Roxas II’s statement that he wanted Aquino to have a longer term. The issue has since been taken up by other officials and political analysts, each giving their opinion on the topic.

Why Aquino should seek a second term, according to a US exec