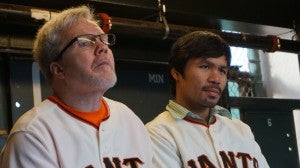 Ask any Filipino sports fan to name the two most dominant athletes with full or part-Filipino heritage and would there be any other names beside the pugilist Manny Pacquiao and the San Francisco Giants double-Cy, twin-no hit hurler, Tim Lincecum?

Anyone else out there?

Back in 2009, when Pacquiao was on the rise, he appeared at AT&T Park to promote a fight against a relatively unknown Ricky Hatton.

Lincecum had just come off his rookie season to be named the Cy Young winner as the National League’s best pitcher. And by time pound-for-pound champ Pacquiao came by, Lincecum was well on his way toward duplicating his first year efforts.

That made the ceremonial first pitch, the battery of the lefty Pacquiao to Lincecum, catching behind the plate, practically a bit of Filipino pop history.

Pacquiao went on to destroy Hatton with a “turn-off-the-lights” knockout. It astonished the world and accelerated  Pacman’s rocket ride that included Time Magazine, political success and even a column from me that proclaimed Pacquaio to be akin  to another bright charismatic  light of the day—Barack Obama.

Lincecum simply won his second Cy Young award, the first pitcher in MLB history to do so awarded in his first two seasons.

As we saw last week in San Francisco, nothing lasts forever.

When Pacquiao, now 35, came to AT&T Park to begin promoting his November fight in Macao against the modestly talented Chris Algieri, he seemed a little weary.The crowds following him were smaller. Even after avenging last year’s loss to Timothy Bradley, Pacquiao is nowhere near the heights of 2009. 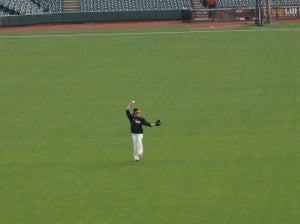 Tim Lincecum in the outfield. PHOTO BY EMIL GUILLERMO

Lincecum has fallen even harder. Sure, he’s notched his $17-million contract in the off-season, and he threw his second no-hitter of his career earlier this year. But pronouncements of the old Tim being back have been premature. A 9.49 ERA and a 1-3 record in his last six starts, with the Giants fighting for the playoffs, has earned Lincecum a demotion to the bullpen.

Now as Pacquiao paraded around AT&T Park, Lincecum was in center field working on his unique pitching motion. When it was time for the ceremonial first pitch this time around, Lincecum didn’t go out there. Sergio Romo did.

Lincecum emerged on Sunday, and showed he has a ways to go. In relief, and with his team up 14-2 against Milwaukee, Lincecum gave up a home run to Ryan Braun in the 8th. And then came a sloppy 9th when Lincecum hit a batter, then had a passed ball. In the end, it was 36-pitches in two innings, for a less than stellar three runs, three hits, 1 homer, no walks, but no strikeouts.

It all adds to the doubts if Lincecum can comeback.

Pacquiao may or may not fare much better.  He knows there’s just one fight people want to see—the one against the man now heralded as the “pound-for-pound” champ Floyd Mayweather.

I got Pacquiao in the corner and asked him pointblank about that.

He wants to fight Mayweather but simply says, ““It’s up to him now, if he wants to.”

Talking with Pacquiao in English is often difficult. Like many Filipinos whose English is not their first language,  he talks with his eyebrows in a kind of yes/no code. So I know he’s a bad interview like I’d be bad  in  French if Le Monde asked me to comment on Israel and Gaza.

So I give Manny a pass.  Someone is teaching him to do yes/no, two-sentence answers, and to let his gloves do the talking.

Pacquiao does that dutifully. And then pours on the smile and charm.

He will not refuse a picture with a baby. Or signing an autograph for a kababayan. It’s campaign-like.

I asked him about Filipino presidential politics and whom he supports. “I haven’t decided yet,” he said.

The most assured thing he said all day? It came before the smallish crowd that paid $125 a ticket for a special session with the champ, who boldly predicted the outcome of the November fight: “In Jesus’ name, victory is mine.”

None of this “I am the greatest” stuff, which must be deemed as lacking in humility.

Normally, when I write about Pacquiao I plead with him to save his brain power for the pursuits that he says he wants after boxing, like being a political force in the Philippines.

I asked his trainer Freddie Roach when the time to call it quits might come.

We were on the playing field and everyone was watching Manny clown with the Giant’s mascot Lou Seal.

I mentioned how when Manny was at AT&T in 2009 and then knocked out Hatton. Does Manny still have it?

“Well we haven’t had a lot of knockouts lately,” Roach said. He explained that Manny’s fighting weight was at 147, but he’s looking to go to 140 potentially.

I asked Roach when it would be time to tell Manny he’s done.

“We haven’t even come close to that yet,” Roach told me. “But when I see a decline in his assets, then I will think like you. But we’re not close yet. He works harder than he did when I first met him.”

The road show was to go on to Vegas, then Los Angeles, and then to New York by September 4.

Maybe by then, the entourage will pep up.

Algieri, a New Yorker, seems like a nice opponent. Taller, and smarter with an advanced degree. But he must like boxing’s paydays.

“Manny’s fought taller fighters before,” said Roach. “Get a little closer, they go away. The kid (Algieri) is left-handed but leads with his power hand. Doesn’t have much power in his right hand. He can jab, but as long as he doesn’t run too much, we’re OK.”

That could mean Algieri is merely fodder for Pacquiao as he tries to stay fit for Mayweather. Perhaps by spring?

“We’ve done all we can on our side to make the fight happen,” said Roach.

That means before that big payday with the fight everyone hopes to see, there’s the warm-up.

Manny and Freddy are just doing what a boxer and his trainer are supposed to do–trying to sell tickets.

Emil Guillermo is an award-winning journalist and commentator based in Northern California.