‘Better to watch dolphins on TV’ 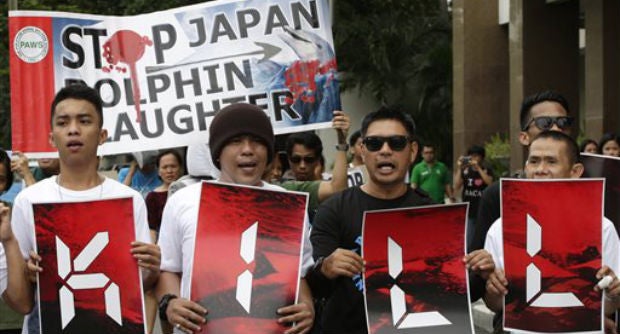 Environmental activists shout slogans as they form the phrase “Stop the Killings” outside the Japanese Embassy Monday, Sept.1, 2014 at suburban Pasay City to protest the annual hunting of dolphins in Taiji, Japan which starts on the first day of September. AP/Bullit Marquez

MANILA, Philippines–Instead of watching live dolphin shows, kids can show their love for these endangered mammals by watching educational shows on TV.

So advised the environmental group Earth Island Institute Philippines, which said that watching dolphin shows was a way of encouraging the mass dolphin hunt and slaughter in Taiji, Japan, that happens from Sept. 1 to March every year.

“Our call to students is, if they love dolphins, they should not watch dolphin shows. They can learn more from watching National Geographic or Animal Planet or Knowledge Channel,” said Trixie Concepcion, the group’s regional director for Asia.

In the annual hunt for dolphins in Taiji, hundreds of dolphins, porpoises and small whales are herded into a cove where the mammals are grouped into two: those that can be sold to marine parks and those that will be killed for their meat.

The practice has been protested by members of animal welfare groups since 2005. On Monday, the groups staged a peaceful rally outside the Japanese Embassy in Manila and expressed their outrage at the Taiji dolphin hunting season with placards that said, “Stop the Killings!”

Concepcion said it was ironic that while dolphin hunting is illegal and punishable with a P5,000 fine and imprisonment under the Fisheries Administrative Order 185, dolphin importation is allowed.

She said the group was opposing a marine park application to import beluga whales, the light-colored whales that live in the Arctic, since they cannot survive in a tropical country. Conception cited the tragic death a few months ago of the two beluga whales imported some years back by a marine park in Jakarta, Indonesia.–Dona Z. Pazzibugan