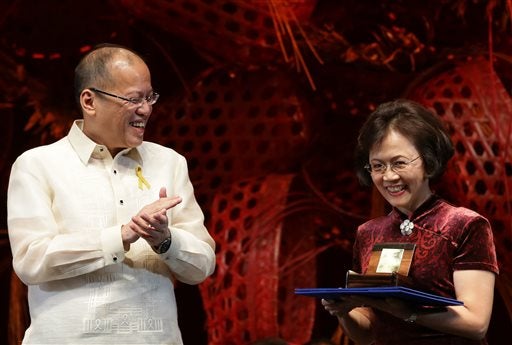 MANILA, Philippines–Gracing the Ramon Magsaysay Award ceremonies, President Aquino on Sunday urged Filipinos to respond to the challenge of uplifting the lives of their fellowmen, especially the marginalized.

Aquino, who attended the award rites at the Cultural Center of the Philippines in Pasay City, paid tribute to the dedication of the awardees in serving others.

“These individuals have been confronted by despair but continue to promote social justice and contribute to the improvement of the society,” he said.

Recognized for her “unassailable journalism” that changed the landscape of journalism in China, Hu said she was humbled by her award.

“We face many obstacles to perform our jobs and these moments never come easy, but I never give up,” she said during the ceremony.

Indonesian Manurung dedicated herself to uplifting the lives of forest people in Indonesia. “I dedicate my work to my students, who are my life teachers,” she said.

Describing herself as a great fan of adventure films, Manurung said she had aspired to someday be like Indiana Jones. She said she hoped for a time when indigenous people could determine their own fate.

In his response, Filipino teacher Halasan said teachers like him could help build a strong Philippines by simply doing their jobs and expecting nothing in return.

Aquino described the awardees as modern-day heroes who should be a challenge to all Filipinos to realize that in their respective fields, they all had the capacity “to help those who have less.”

“How we respond to the challenge of our marginalized fellowmen will determine what our history will write about our generation,” he said.

DOH: Spraying, misting vs COVID-19 not recommended; may even cause harm