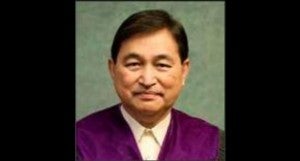 MANILA, Philippines — Former Supreme Court (SC) Associate Justice Adolfo S. Azcuna has been elected as one of the new commissioners in the International Commission of Jurists (ICJ), Malacañang announced Saturday.

Azcuna made history as the first Filipino commissioner of the said international human rights non-government organization.

He will serve a five-year term as an ICJ commissioner.

According to Presidential Spokesperson Edwin Lacierda, Azcuna’s appointment to the ICJ “brings his wealth of experience and wisdom to the ICJ.”

“We are confident that ICJ will benefit from his long years as a jurist and as a trainor of judges,” Lacierda added.

Before his appointment as ICJ commissioner, Azcuna served as an Associate Justice of the Supreme Court from 2002 to 2009. He has also been the chancellor of the Philippine Judicial Academy since 2009.

Azcuna was born in Katipunan, Zamboanga del Norte on February 16, 1939. He obtained his Bachelor of Arts and juris doctor degrees from Ateneo De Manila University. Azcuna placed fourth in the 1962 Bar examinations.

The ICJ has also chosen four other lawyers and academics as its new commissioners: Kyong-Wahn Ahn from South Korea; Miguel Carbonell from Mexico; Yvonne Mokgoro from South Africa; and Ajit Parakash Shah from India.

The ICJ is composed of 60 judges and lawyers from all over the world. It “promotes and protects human rights through the Rule of Law, by using its unique legal expertise to develop and strengthen national and international justice systems.”

A case of premature campaigning

Azcuna bows out of SC