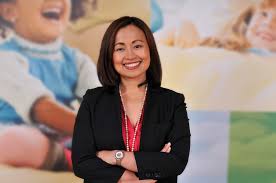 BOSTON, Massachusetts– Filipina businesswoman Sheila Lirio Marcelo is riding a wave of success with her Care.com, which connects parents with babysitters and nannies, the elderly with home healthcare providers and pet owners with walkers and sitters.

Care.com went public in January on the New York Stock Exchange at $17 a share, the first venture-backed Massachusetts tech firm to debut on Wall Street in more than 18 months. In July, it announced that revenues and memberships are up.

Her experience taking care of her first child with husband Ron Marcelo became her inspiration for Care.com.

Marcelo has graduate degrees in law and business from Harvard University. She comes from a family that ran coconut production, a rice mill, a trucking company, chicken farms and other businesses in the Philippines. Her family emigrated to Houston, Texas when she was six, reports the Boston Globe.