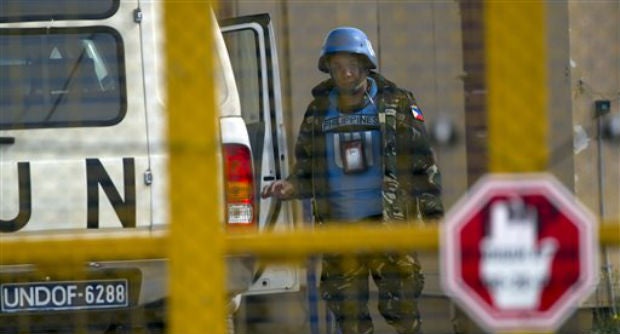 In March 8, 2013, file photo, a UN peacekeeper from the Philippines UNDOF force crosses to Syria at the Quneitra Crossing between Syria and the Israeli-controlled Golan Heights. The pullout of more than 400 Filipino peacekeepers from Liberia and the Golan Heights may take two to three months, the Department of Foreign Affairs said on Monday, Aug. 25, 2014. AP

MANILA, Philippines–The pullout of more than 400 Filipino peacekeepers from Liberia and the Golan Heights may take two to three months, the Department of Foreign Affairs (DFA) said.

“It may take two to three months to complete the process,” DFA spokesman and Assistant Secretary Charles Jose stated on Monday.

Malacañang had said over the weekend it was ordering the repatriation of the Filipino soldiers serving as peacekeepers for the United Nations in the Golan Heights in the Middle East and Liberia in West Africa.

The government was forced to pull the troops out due to security and health concerns.

Foreign Secretary Albert del Rosario had said 115 soldiers in Liberia were being recalled because the Ebola virus outbreak “has the potential of being catastrophic.”

Top defense and military officials on Monday defended the decision to pull out the 332-strong Filipino peacekeeping mission from the Golan Heights, saying the security equation in the Israeli-occupied territory had changed.

Defense Secretary Voltaire Gazmin stressed the decision was not an abandonment of the Philippines’ commitment to the UN Disengagement Observer Force since the pullout process would only start in October when the Filipino troops’ five-year tour of duty expires.

“Our commitment is term by term. Anyway, our commitment is about to end by October so we will give it a rest. But we’re not pulling out our contingents from other UN peacekeeping missions. It’s only in the Golan Heights and Liberia,” he said in an interview at the Libingan ng mga Bayani in Fort Bonifacio, Taguig.

Del Rosario said Filipino troops had been meeting their “peacekeeping obligations” for a long time now. He said the peacekeepers in Liberia had been there for 10 years since 2004, and those in the Golan Heights for five years now since 2009.

“With regards to the Golan Heights, there has been a series of incidents involving our peacekeepers which demonstrated that they are exposed to unexpected serious risks which may worsen on the basis of current developments,” Del Rosario said.

UN peacekeepers have been caught in the middle of the fighting between Syrian troops and rebels in the Golan Heights, the area of separation between Syria and Israel, which has been largely quiet for the last 40 years.

In March 2013, Syrian rebels briefly held 21 Filipino peacekeepers and held four more two months later. All of them were eventually released on the intercession of the United Nations and the Syrian government.

Gazmin noted the Philippine contingent stayed put in the Golan Heights when the security situation started to worsen, unlike other countries which pulled out their troops, referring to Australia, Croatia and Japan.

In the case of Ebola-stricken Liberia, Gazmin said the troops would be put on quarantine for 21 days before leaving the African state and another 21 days upon their arrival in the Philippines.

He also said the government had been conducting periodic threat assessments to evaluate risks affecting the Philippine contingents.

Gazmin did not discount the possibility that the Philippines may redeploy troops to the Golan Heights once the security situation there improves.

“We will be studying that, and our United Nation peacekeeping office will make a recommendation as to where to deploy more forces,” he added.

Malls, parks in NCR are still off limits to minors even with eased restrictions

PNP pleads to public: Play your part, follow safety protocols while on holidays