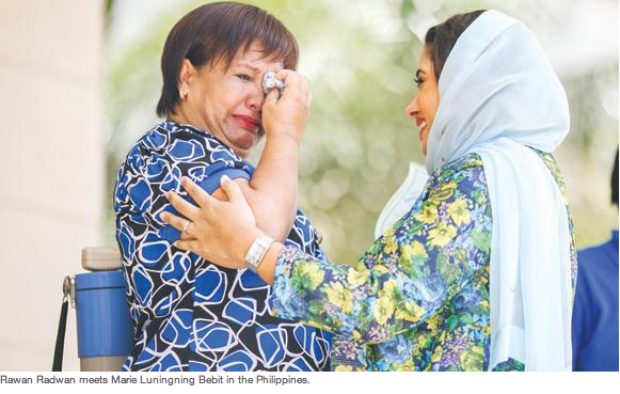 MANILA, Philippines — A journalist in Saudi Arabia has reunited with her long-lost Filipino nanny after the news story on her search went viral on the Internet.

A sister publication of Arab News, Sayidaty magazine, sponsored Rawan Radwan’s trip to Manila about a week ago.

“At first, I thought it was a joke when the magazine informed me that they would fly me out to the Philippines,” Radwan was quoted by Arab News as saying. The report said Radwan lost contact with her nanny Marie Luningning Bernardo- Bebit in 1992.

The emotional reunion will be aired exclusively on local news-magazine show “Kapuso Mo, Jessica Soho” on Sunday, Aug. 31, the report said. A ceremony was organized to recognize the accomplishment of Bebit, the lone female town officer in Candelaria, Quezon, in combatting violence against women and children.

“Seeing her face as I walked toward her, I could see genuine love and I felt the same way,” Radwan was quoted in the Arab News report as saying.

“It was great to surprise her the way we did. It was an epic moment that I will never forget,” she added.

Bebit was quoted in the report sa saying it was a “great opportunity” to see Radwan who she helped and attended to when she worked for Radwan’s family for five years.

“I think I am being rewarded for my volunteer work. I am grateful for everything Rawan and her family had given me before and are giving me now. I will always remember them and will surely keep in touch,” Bebit was quoted in the Arab News report as saying.

“I can see the same smile, the same kindness in her eyes and I still see the nanny who has lived with us for years under one roof,” Radwan said of Bebit.

For the journalist, she told Arab News that the trip to the Philippines was not only an “amazing gift” but also a learning experience about Filipino culture.

Radwan was also given a complimentary stay at the Fairmont Makati Hotel in Manila.