Mistakes to avoid in applying for US citizenship

• Even honest mistakes in application can lead to US citizenship denial

• Applications for US citizenship have surged in the last 12 years; so have denial rates

• Filipinos have the highest rate of naturalization among Asian countries 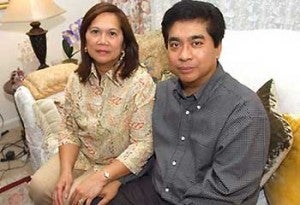 The Sevandos, legal immigrants facing deportation after being denied US citizenship. AP PHOTO

NEW YORK, New York — Dr. Pedro Servano and his wife, Salvacion, have lived in the United States as legal permanent residents for over 30 years. Their four children are Americans, having been born in this country.

But when the Filipino couple applied for US citizenship in 1991, their application was not only denied, but they were also put in removal proceedings.  It has now been over two decades since they started battling a deportation order and to remain in the country.

Like the Servanos, there are many long-term immigrants who believed they were in good moral standing for naturalization. However, because of past mistakes or through the application period, they were rejected from completing the final step of their U.S. immigration process.

According to immigration lawyers and advocates for U.S. citizenship, these legal immigrants may have run afoul of complicated immigration laws without even knowing it.

Others may have had a criminal conviction or provided untruthful information in their application, which are all grounds for naturalization denial, getting their green card revoked or an order of deportation.

For the Servanos, the federal government charged them with misrepresenting their marital status when they first came to the United States.

In the early 1980s, according to several reports, their mothers moved separately to this country as legal permanent residents. They filed successfully the petition for Pedro and Salvacion to get their green cards under the category of unmarried children.

As they settled in their new country, Pedro completed his medical residency in Selinsgrove, Pennsylvania. He and Salvacion, a registered nurse, got married in New Jersey in 1987. Without any problems, they renewed their green cards every 10 years.

But when they submitted their application for naturalization on their own, the immigration officers reportedly discovered that the Servanos were secretly married in the Philippines, before the green cards were issued to them in 1985.

Accused of lying to get their green cards, the couple received an order of deportation.

“Anything you say that isn’t absolutely correct, even if you are just guess-timating your answers, will be considered a lie,” said Paul Zorlan, an immigration lawyer based in Dallas, Texas. “Lying is perjury and you can find yourself being deported.”

Applicants who withhold their real names, try to guess the birthday of their parents or the exact date of their departure and arrival of their past travels abroad, or not being precise about their medical condition, Zorlan added, may be considered “committing fraud” and the immigration office could reject their applications.

A study conducted by Migration Policy Institute, an independent research organization, shows that as applications for naturalization have surged in the last 12 years, denial rates have also been consistently higher at any time.

The highest year was in 2000, when 399,670 applicants were denied or one-third of the applicants. Eight years later, the report added, the U.S. Citizenship and Immigration Services (USCIS) rejected more than 121,000 naturalization petitions, representing 10.4 percent of the 1,167,822 naturalization applications presented.

Reasons for denials, according to MPI, may include: applicant could not prove five years of permanent residence in the United States; was determined to have lack of allegiance to the United States; have bad moral character (which includes criminal convictions); or failed the English language or American civics test.

Facing barriers such as limited English-language skills and ignorance of highly technical immigration laws, immigrants can avail of free citizenship workshops in different cities across the country. These workshops, sponsored by New Americans Campaign, are being held each month.

“This campaign has already spent $85 million in services for eligible immigrants,” Luis Arango-Petrocchi, project manager for the citizenship program at Catholic Charities of Dallas (CCD), said in a briefing with ethnic media. “We’re here to help complete your N-400 [new] application [form], and have immigration attorneys and accredited representatives to review your applications.”

The biggest benefit of the workshop, according to advocates, is that it helps examine the applicants’ eligibility for naturalization and address early detection of red flags, if any, in their applications.

“At the citizenship workshops, we help them practice the test and interview questions and refer them to ESL [English as Second Language] classes,” added Dan Adriansen, CCD’s immigration case manager. “We also inform our clients where to find court documents, if they need to show them, and see if they are eligible for the [$680] application fee waiver.” 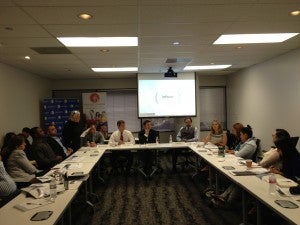 A nonprofit briefing in Dallas, Texas, on mistakes to avoid in applying for US citizenship. PHOTO BY ANTHONY ADVINCULA

Mario Vargas, a 23-year-old political science student at University of Texas, was one of those who benefited from these citizenship workshops. When he applied for an internship with a federal government agency, he realized that his green card was not enough.

Through the help of Proyecto Inmigrante, one of the immigrant groups based in Dallas and Forth Worth, Texas, that is part of the citizenship campaign, Vargas became a naturalized US citizen last year.

“Between 2010 and 2014, there has been an increase in the number of legal permanent residents eligible for naturalization, and yet we are not tapping into that,” said Claudio Ortega-Hogue, Texas director of civic engagement for NALEO Educational Fund.

Nationally, in 2012, an estimated 13.3 million immigrants were granted legal permanent resident status in the country — and nearly 8.8 million were eligible for naturalization. Yet, according to the Department of Homeland Security (DHS) Office of Immigration Statistics, only 757,434 were naturalized.

Of all immigrants from different ethic groups who naturalized in 2012, about 5.9 percent came from the Philippines— the highest among Asian countries, followed by India, 5.7 percent; China, 4.2 percent; Vietnam, 3.1 percent; and Korea, 2 percent. Mexican immigrants had the leading number of naturalization at 13.5 percent.

Some of the obstacles that people get deterred from applying for naturalization include lack of English skills and civic knowledge, criminal and immigration history, and the $680 fees for each applicant.

To be eligible for naturalization, the applicant must be a legal permanent resident and at least 18 years old; have lived in the United States continuously for five year or three years if married to a U.S. citizen.

The applicant must also be able to speak, read and understand basic English; pass a background check; show knowledge of U.S. government and history; and swear allegiance to the United States.

Acquiring citizenship gives immigrants not only the right to vote and to work for the federal government, but also protects them from deportation, allows them to travel and live abroad indefinitely without losing their status in the United States and petition their children and immediate family members, advocates say.

“A petition from a citizen has a faster approval than the one filed by a legal permanent resident or a green card holder,” added Adriansen.

Suit filed over alleged delays, denial of US citizenship to Muslims