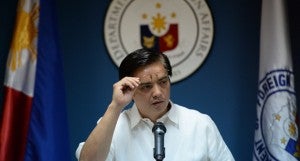 MANILA, Philippines–The Department of Foreign Affairs will include incidents of Chinese harassment of Filipino fishermen exercising their right to fish in Philippine seas, in its new diplomatic protest to be filed this week against China’s “illegitimate sovereignty patrols” in Philippine waters.

Incidents like this would show proof of the Philippines’ concern over the “constant and overwhelming presence” of China in Philippine waters, said Assistant Secretary Charles Jose, the DFA spokesman.

He said they will be included in a new diplomatic protest “because this is the result of the presence of China, they are harassing (fishermen) and this is affecting our ability to exercise our sovereign rights there.”

Jose made the remarks in reaction to an incident last Aug. 1 where a Chinese Coast Guard vessel allegedly harassed a small fishing boat carrying local officials led by Pag-asa island Mayor Eugenio Bito-onon Jr. and journalists to the island off Palawan.

According to Jose, the DFA has not received a report on the Pag-asa island incident, explaining that the department gets intelligence reports involving Filipino fishermen being harassed by Chinese ships in Philippine waters.

He said the diplomatic protest will be made through a note verbale sent to the Chinese Embassy in Manila.

Jose earlier said diplomatic protest will deal not only with the incident reported by President Aquino involving the presence of two Chinese research vessels on the oil-rich Recto Bank in the West Philippine Sea, but also to what appeared to be China’s “constant and overwhelming presence” in areas where the Philippines has exclusive sovereignty rights.

Jose said the government was concerned not only about the Chinese intrusion in Recto Bank but the overall situation where Chinese ships were conducting “illegitimate sovereignty patrols” in Philippine waters.

China’s conduct violated the UN Convention on the Law of the Sea and the 2002 Declaration on the Conduct in the South China Sea, he said.

Jose also said the government was considering taking other measures to address Chinese intrusions but declined to give details.

Meanwhile, Bito-onon on Tuesday urged the government to protest the harassment by a Chinese Coast Guard vessel of a boatload of journalists, including himself, as they approached the disputed Ayungin Shoal of Pagasa island more than two weeks ago.

“We were on our way to Ayungin Shoal when a Chinese Coast Guard vessel with body number CCG 311 tried to block our path and stopped in front of us that we almost collided with them. It was a dangerous and irresponsible maneuver,” he said.

“It was already dark when it happened last Aug. 1 and the sea was very turbulent. Anything could have happened to us if we were not able to maneuver because they were just about 50 meters right in front of our boat,” Bito-onon said in a text message sent from Kalayaan on Pag-asa island.

Bito-onon said they managed to slip past the Chinese vessel despite the rough seas by maneuvering into the shallow waters before finally reaching the BRP Sierra Madre wreck where a detachment of Philippine soldiers is stationed.

The mayor explained that they were stranded on the Sierra Madre for five days because of Typhoon “Inday.”

Meanwhile, Foreign Secretary Albert del Rosario said the Philippines does acknowledge China’s rise as an economic giant and its role in world affairs.

However, for Beijing to be viewed as a “positive force and responsible power, it must adhere and respect the rule of law, especially in settling the South China Sea disputes, he said.

Del Rosario made the statement at the 51st National Defense College of the Philippines founding anniversary and alumni homecoming at Camp Aguinaldo in Quezon City.

The foreign secretary talked about the approaches that the Philippines has undertaken to help keep peace, security and stability in the Asia-Pacific region.

Del Rosario said that China has been manifesting an “increasing pattern of aggressive behavior and provocative actions” in the South China Sea which “seriously threaten the peace, security, stability and freedom of navigation and overflight in the region.