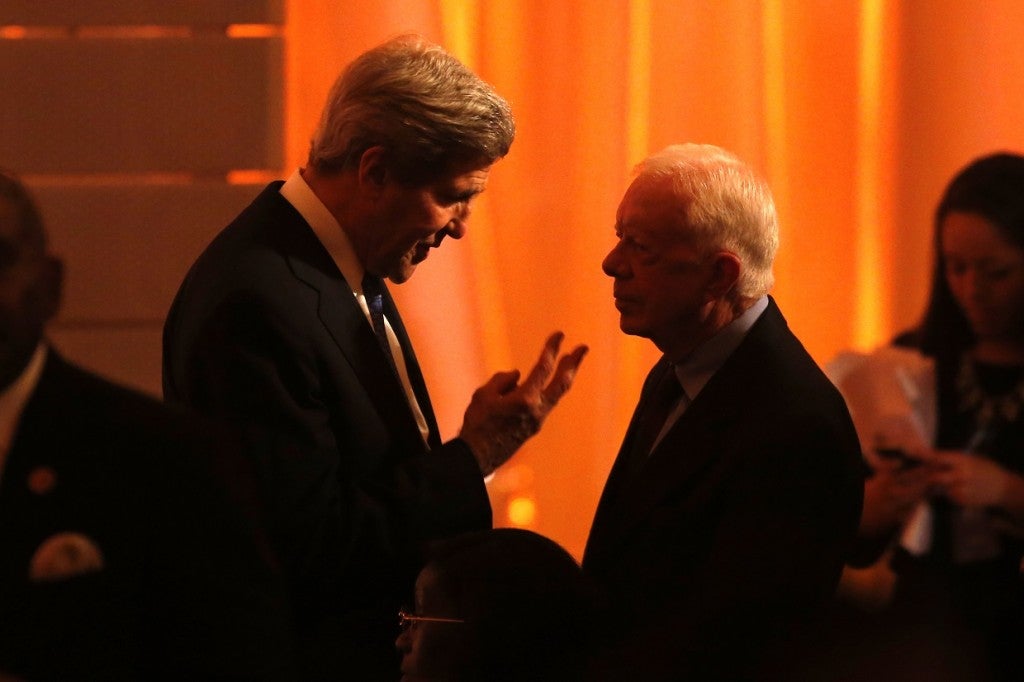 Secretary of State John Kerry, left, talks with former President Jimmy Carter before President Barack Obama offers a toast at a dinner for the U.S. Africa Leaders Summit, on the South Lawn of the White House,Tuesday, Aug. 5, 2014. African heads of state are gathering in Washington for an unprecedented summit to promote business development. (AP Photo/Charles Dharapak

MANILA, Philippines — Eight distinguished “freedom fighters,” including former US President James Earl “Jimmy” Carter, will be honored on Aug. 21 by the Ninoy Aquino Movement (NAM) during the group’s commemoration of the 31st death anniversary of the late Senator Benigno Aquino Jr.

This was disclosed on Tuesday by NAM founding chair Heherson Alvarez, who said they would “celebrate Ninoy’s martyrdom anew at the tarmac (of the Ninoy Aquino International Airport) where his blood was spilled.”

“This is not only to honor a democratic icon in contemporary Philippine history, but also to help preserve the Filipinos’ collective memory of a titanic struggle against tyranny,” the former senator and currently Climate Change commissioner also said.

Alvarez said “this has been a tradition since the restoration of Philippine democracy in 1986. Every year, commemorative ceremonies are held at the NAIA where a historical plaque has been installed.”

This year, the NAM, along with the Commission on Human Rights, “will mark the occasion with a requiem mass and wreath-laying that will serve as a remembrance of appreciation for Ninoy and all NAM members who have passed away.”

Another highlight of the event is the “awarding of the Ninoy Aquino Memorial Medals of Valor to distinguished freedom fighters and leaders who assisted the cause of restoring democracy,” said Alvarez, who formed the NAM in 1983 shortly after the senator’s death.

Carter will be represented in the NAIA program by an unnamed US Embassy official, according to Cecile Guidote-Alvarez, Heherson’s wife, also director of the International Theater Institute and the Unesco Dream Center-Philippines.

President Aquino will send a Cabinet official to the event, according to Cecile.

But in a message, the President has said he is “one with the Filipino people in remembering the 31st death anniversary” of his father.

“Armed with a clear conscience and driven by his fervent love for motherland, he rejected a life of peace abroad to be the voice of freedom for his countrymen, lost a decade before to Martial Law. His decision cost him his life, but his actions roused a people long inundated by fear, apathy and despair, rallying Filipinos against a regime that had robbed them of their liberties,” he also said.

According to Mr. Aquino, his father’s “journey, struggle and death remind us that it is one of our duties as citizens to give a part of ourselves so that our nation may move forward.”

“We are fortunate to live in a time when so little is asked of us to contribute to the advancement of our republic: to pay the right taxes, to work for an honest wage and to look after those who live in the margins of our society. By fulfilling these, we take our place as heroes of our generation and become the catalysts of positive, meaningful change in our communities,” he said.

The President expressed hope that Filipinos “remain steadfast on the straight path and bring to fruition the equitably progressive Philippines that Ninoy and our forefathers dreamed of for our people.”

Coming home was a choice of martyrdom 29 years ago