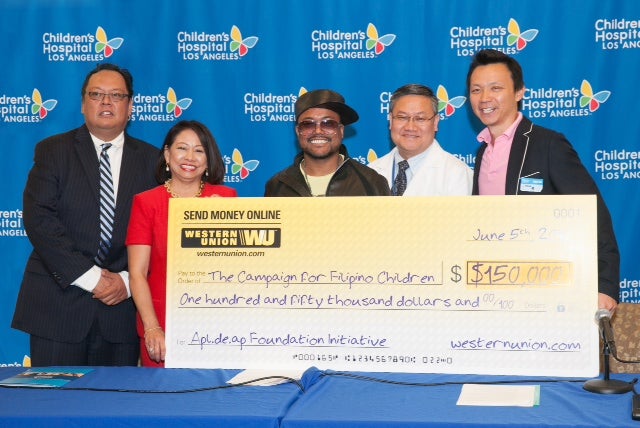 Officials of the Apl.de.ap Foundation and Children’s Hospital Los Angeles receive giant check for $150,000 towards the campaign against childhood blindness. From left to right: Ted Benito, Sonia Delen, apl.de.ap, Thomas Lee, MD, and Bobby Fan, westernunion.com director of marketing in the US. CONTRIBUTED PHOTO

Western Union Digital donated  $150,000 to the Apl.de.ap Foundation’s Campaign for Filipino Children, a two-year effort to help in the diagnosis and treatment of retinopathy of prematurity, an eye disease that affects premature babies.

This preventable eye disease affects at least 10 percent of all premature births in the Philippines and causes irreversible blindness if left untreated.

The Campaign for Filipino Children estimates it can protect and treat 4,380 babies each year by providing education and support to Filipino medical professionals.

The Apl.de.ap Foundation has partnered with renowned pediatric eye surgeon Thomas Lee, MD, and his team of experts in The Vision Center at Children’s Hospital of Los Angeles with their groundbreaking sight-saving work.

Lee has developed methods that allow him to monitor eye exams and surgeries halfway around the world. He’s already tackled retinopathy of prematurity in Armenia, China, Mexico, and Mongolia.

Western Union’s donation is a huge step towards the two-year fundraising goal of $650,000.The drive kicked off last June 8 with a benefit concert at the Greek Theatre in Los Angeles.

A second concert headlined by apl.de.ap is scheduled for Aug. 16 at the Agua Caliente’s 2014 Summer Extravaganza in Palm Springs.

To make a donation, head to www.ForFilipinoChildren.com. The money will help the campaign, as well as the rebuilding efforts in the Philippines after the devastating Typhoon Haiyan.