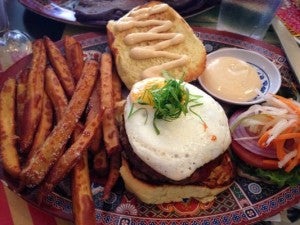 NEW YORK, New York — It’s been a savory run for Filipino chow in the Big Apple.

Filipino eatery Jeepney Gastropub won the golden hamburger trophy at the South Street Seaport 2014 Battle of the Burger on August 7, where throngs of grazers who paid the $29 fee to eat at the festival voted for their favorites.

Meanwhile on July 31, a New York Times food critic gushed over the sisig at Lumpia Shack Snackbar in the West Village.

Jeepney Gastropub out-grilled the competition with its umami-loaded Chori Burger, a thick patty slathered in Maggi aioli, in banana ketchup and Maggi aioli and topped with longganisa, hence “chori” burger (for chorizo).

In the same competition sponsored by Time Out New York, Fil-Am Dale Talde’s entry was a runner-up. Talde’s saloon Pork Slope (a play on Park Slope, a neighborhood in Brooklyn) specializes in pork dishes.

“Ears, jowls, belly. They come brined, blanched, shattered and fried, each tip blackened and alchemized, each pocket of fat approaching liquefaction. A raw yolk idles on top. Stab it and churn,” writes Mishan.

“This is sisig, the greatest pork hash — arguably greatest pork dish — on earth. Say the name with two flicks of the tongue, somewhere between a whisper and a hiss,” she adds.

However, with “Ligaya” for a first name, Mishan may be a tad partial to the mouthwatering Filipino invention.