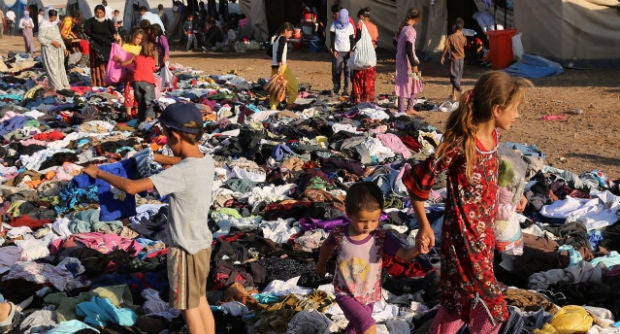 Displaced Iraqis from the Yazidi community look for clothes to wear among items provided by a charity organization at the Nowruz camp, in Derike, Syria, Tuesday, Aug. 12, 2014. In the camps here, Iraqi refugees have new heroes: Syrian Kurdish fighters who battled militants to carve an escape route to tens of thousands trapped on a mountaintop. AP

MANILA, Philippines–The Catholic Bishops Conference of the Philippines (CBCP) announced a day of prayer for peace in Iraq on Monday.

CBCP president Lingayen-Dagupan Archbishop Socrates Villegas, in a statement Tuesday, asked the clergy throughout the country “to offer all our Masses on Aug. 18 as a Votive Mass for Peace and Reconciliation in Iraq.”

Villegas called for the day of prayer “as a gesture of spiritual unity with our persecuted brethren in northern Iraq and in response to the call of the Holy Father for all the faithful in the Church to raise a voice of ceaseless prayer for the restoration of peace.”

He also called on students to pray the rosary in their schools on that day.

“It would be opportune for our schoolchildren to pray the rosary in school on Aug. 18 for the healing of Iraq. Let us be united with Pope Francis in this quest for peace,” Villegas said.

He said Pope Francis will also preside over a Mass for Peace and Reconciliation at the Myeongdong Cathedral in South Korea on that day.

During the praying of the Angelus on July 20, Pope Francis said: “Our brothers and sisters are persecuted. They are pushed out, forced to leave their homes without the opportunity to take anything with them. To these families and to these people I would like to express my closeness and my steadfast prayer. Dearest brothers and sisters so persecuted, I know how much you suffer; I know that you are deprived of everything. I am with you in your faith in Him who conquered evil.”

The Pope appealed to the conscience of all the people, and to each and every believer he repeated: “May the God of peace create in all an authentic desire for dialogue and reconciliation. Violence is not conquered with violence. Violence is conquered with peace. Let us pray in silence, asking for peace; everyone, in silence… Mary Queen of Peace, pray for us.”

Only 13 of 900 OFWs repatriated from Iraq, no evacuation since–DFA

US sending arms to Kurds in Iraq