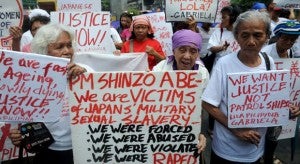 MANILA, Philippines—The Supreme Court has upheld its 2010 ruling junking the petition of Filipino comfort women to compel the Philippine government to take up their cause of seeking a formal apology from the Japanese government for the abuse they endured during World War 2.

In a full-court resolution on Tuesday, the high court denied motions for reconsideration that the women, collectively called the “Malaya Lolas” or Liberation Grandmothers, filed to appeal the April 28, 2010 ruling of Associate Justice Mariano del Castillo.

The petition was originally filed by 60 grandmothers in 2004.

Among the motions dismissed on Tuesday was a supplemental plea that pegged its appeal on allegations that Del Castillo had plagiarized his decision, including portions supposedly copied from at least three law publications.

Supreme Court spokesperson Theodore Te said in a press briefing on Tuesday, that Del Castillo did not take part in Tuesday’s resolution, along with Associate Justice Marvic Leonen who, as dean of the University of the Philippines law school, signed a July 2010 position condemning the decision along with other faculty members.

The court did not release Tuesday’s resolution.  In Del Castillo’s upheld decision, the Supreme had ruled that “it is not within our power to order the Executive Department to take up the petitioners’ cause.”

The Malaya Lolas are among some 200,000 women in the Philippines, China and Korea who were forced to serve as sex slaves of the Japanese Imperial Army during the war.

In May 2013, the Department of Foreign Affairs condemned remarks from outspoken Osaka Mayor Toru Hashimoto who had said that the comfort women system was a “necessary” part of maintaining the well-being of Japanese soldiers during the war.

The foreign office at the time issued a reminder of “the importance of adhering to the language and tone” of apologies from Japan’s Chief Cabinet Secretary Yohei Kono in 1993 and Japanese Prime Minister Junichiro Koizumi’s 2002.

Koizumi, in a letter to Filipino comfort women, had said that the systematic sexual abuse of women was a “grave affront to the honor and dignity of large numbers of women.”