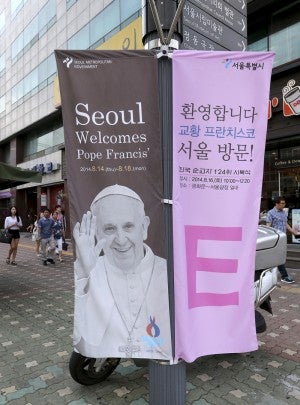 A banner showing Pope Francis is displayed on the street in Seoul, South Korea, Monday, Aug. 11, 2014. Pope Francis is scheduled to make a five-day trip to South Korea, starting Aug. 13 to participate in a Catholic youth festival and to preside over a beatification ceremony for 124 Korean martyrs. AP PHOTO/AHN YOUNG-JOON

VATICAN CITY—When Pope Francis was a young Jesuit, he wanted to follow in the great Jesuit tradition and become a missionary in Asia. Health problems kept him home, but he is finally getting his chance, traveling to Asia as the world’s most visible and popular Catholic missionary.

During his visit to South Korea this week, he’ll bring a message of peace and reconciliation to the divided Korean peninsula and a call for young Catholics to take up the missionary charge themselves, spreading the faith on a continent where the Catholic Church is small but growing. Asia’s Christians have endured dramatic persecutions over history that echo attacks against Christians today in parts of the Middle East and Africa.

While the pope is expected to reach out to Pyonyang during the visit, no North Koreans are expected to attend. The archdiocese of Seoul invited a delegation of Northern Christians, but Pyongyang authorities informed organizers last week that they wouldn’t come, the Vatican said.

The Aug. 13-18 trip marks the first time a pope has been on the Korean peninsula in a quarter-century and the trip kicks off what is expected to be a very Asian-focused year for the 77-year-old pontiff: He will travel to Sri Lanka and the Philippines in January and there are rumors of a trip to Japan next year as well.

Why Asia? Francis himself has said he must go because Emeritus Pope Benedict XVI never managed to get there during his eight-year pontificate. But more to the point, Asia is the future of the Catholic Church.

Despite being a minority religion in every Asian nation except the Philippines, the Catholic Church baptizes more Catholics in Asia every year than in traditionally Christian Europe, according to Vatican statistics. In 2001 there were 44,446 priests in Asia; by 2012 the number had soared to 60,042. While Africa saw a similar surge in vocations, the number of Europe’s priests shrank from 206,761 to 186,489 in the same timeframe.

St. John Paul II said on several occasions that while Christianity was sowed in Europe in the first millennium and in the Americas and Africa in the second, the third millennium belonged to Asia.

“The pope wants to refresh the evangelization of Asia, which was a major theme that John Paul II had very much in his heart,” said the Rev. Bernardo Cervellera, head of the Vatican-affiliated missionary news agency AsiaNews. “Going to meet the young people of Asia means to go find the future of Asia.”

And Francis will find young people: The main reason for the trip is to participate in the Asian version of World Youth Day, the big Catholic youth festival. Young Catholics from some 23 Asian countries are expected to attend. While their numbers won’t approach the millions who turned out for Francis’ first World Youth Day in Brazil last year, organizers expect several thousand.

In many ways, South Korea’s church is the model for the church on the continent and beyond: In fewer than 50 years, Catholics have gone from about 1 percent of the population of 50 million to more than 10 percent today. The local church estimates that it might count 20 percent of the population by 2020. On average, more than 100,000 Koreans are baptized every year. Once a country that welcomed missionaries to help spread the faith, South Korea now sends its own priests and nuns abroad to evangelize other countries.

Earlier this year, Francis himself tapped a Korean priest to be an auxiliary bishop in his native Buenos Aires, one of the nearly 1,000 Korean priests, nuns and religious brothers currently on mission outside of Korea.

“On this continent, the church may be small but it grows four to five percent a year,” Cervellera said. “There are abundant vocations, people who are decided in their faith, so it could be in some way a model for all the other churches.”

But South Korea also represents a remarkable anomaly in the 2,000-year history of the Catholic faith.

Unlike most countries where missionary priests brought Catholicism and spread it, South Korea’s church is uniquely homegrown: Members of Korea’s noble classes discovered the faith in the 18th century reading books by the Jesuit missionary Matteo Ricci that they brought back from China. Their interest spread, until finally the first Korean was baptized in Beijing in 1784.

“The Gospel in Korea wasn’t brought by conquerors or missionaries,” noted Cardinal Pietro Parolin, the Vatican No. 2, in the introduction of “Young People and Martyrs in Asia: Pope Francis’ Mission in Korea,” a book about the church’s unique history. “This is valid for other Asian countries, where the Christian faith often finds trouble and obstacles and is still seen as a foreign faith.”

It’s an important point that Francis is expected to stress during the trip, with an eye to countries such as China where the Catholic Church in general and the Vatican in particular are still viewed with skepticism.

Despite its homegrown Korean roots, Catholicism wasn’t immune in Korea from the persecution that was waged against Christians across Asia in the 18th and 19th centuries. An estimated 10,000 Korean Catholics were killed by the Joseon Dynasty.

“They were considered to be in opposition to the social system of Korea at the time,” said the Rev. Federico Lombardi, the Vatican spokesman.

Francis will beatify 124 of these martyrs during his trip. Another 103 were canonized by John Paul during a 1984 visit.

Aside from the Asian youth festival, the other key event of the visit is a Mass for peace and reconciliation that Francis will celebrate on his final day, Aug. 18, in Seoul’s main cathedral.

Among Koreans with a history of persecution in attendance: a small number of women who were used as sexual slaves by Japan’s military during World War II.–Nicole Winfield