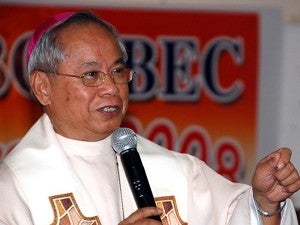 MANILA, Philippines–A Church official from Mindanao hopes that the visit of Pope Francis to the Philippines in January next year will lift the spirits of the survivors of the back-to-back disasters that hit the Visayas late last year and help advance the peace process in the Muslim region.

Cotabato Archbishop Orlando Cardinal Quevedo said he believed that “the papal visit and the continued Church engagement in the peace agreement, and the Islamic presence in the Philippines could be helpful,” according to the Catholic News Service.

“Signed peace agreements do not guarantee a just and lasting peace when the political and economic causes of war are aggravated by cultural and religious biases, and prejudices that have been operative in the minds and hearts of Muslims and Christians for four centuries,” the news service quoted Quevedo as saying.

According to the Denver-based Catholic News Service, Quevedo said the only way to deal with the injustices happening in the region was to look at their territory as a product of “political realism.”

“They can no longer own the entire area, therefore the idea is a win-win situation to make sure national sovereignty is preserved… [and] to also acknowledge this culture, which is distinctly different from the Christian culture of the rest of the country,” Quevedo said.

To attain peace, poverty and injustice, which include human rights violations, corruption and land conflict—the root of conflict in Mindanao—must be tackled, Quevedo said.

“The [root] of the conflict is injustice and after studying Moro history, I began to believe they have lost their own sovereignty, their own identity as a distinct group and because of that the government has neglected them in terms of development,” he said.

A delay in the submission of the draft law to Congress has led to speculations that the peace process might collapse, with the two parties continuing to disagree on the provisions of the proposed Bangsamoro Basic Law.–Jocelyn R. Uy