BACOLOD CITY—People still do a double take to tell one from the other.

But after the successful operation of the celebrated conjoined twins 10 years ago, they are now worlds apart and are living separate lives.

There will be ice cream and cake for Negrense twins Carl and Clarence Aguirre—born conjoined at the head—when they celebrate 10 years of separation at their home in Scarsdale, New York, on Saturday (Sunday in Manila), their mother Arlene said.

“The people coming to the party are Filipino friends, doctors, nurses and friends of Clarence and Carl,” she told the Inquirer.

On Monday, Arlene thanked the New York doctors who successfully conducted the surgical separation of her sons at the 10th anniversary of the medical milestone at Montefiore Medical Center in New York.

The boys were separated on Aug. 4, 2004, after four surgeries in a space of nine months by a team of medical specialists led by Dr. James Goodrich, a pediatric neurosurgeon.

“The party [at the hospital on Monday] was great. We saw the medical team again. And everybody was happy to see us. It was great to have that celebration to mark their milestone,” Arlene said.

The boys attended the celebration, which was highlighted by a video clip showing Clarence dancing. 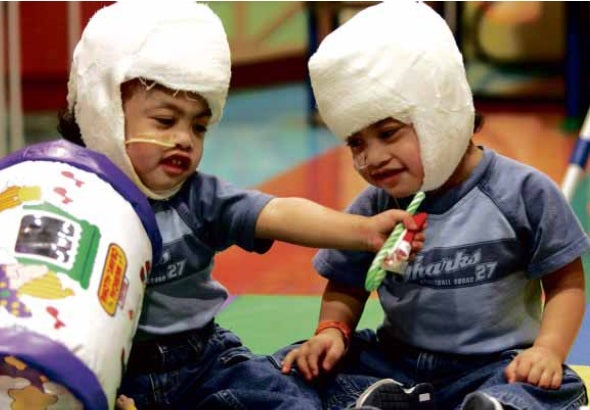 PLAYFUL THEN ANDNOW Once-conjoined twins Carl and Clarence Aguirre show their playful selves in these photos provided by Children’s Hospital at Montefiore in New York. Left photo was taken in December 2004, four months after they were surgically separated. AP

Goodrich, who called the separation a resounding success, gave a brief lecture on the history of separating the conjoined twins.

Arlene, a single mother who has no family with her in the United States to help her take care of the boys, said life there was “very hard,” especially since she had no means of earning a living.

“The only thing that makes it a little bit better is because Montefiore helps me out with everything. And I have a lot of support and friends,” she said.

According to Arlene, the boys are doing great and they will both be in seventh grade by September.

Carl and Clarence have different personalities, she said. “Clarence is the outgoing kid, very sweet, very protective of his brother and very independent. He likes to dance and sing. He loves Michael Jackson, Maroon 5, Usher and One Direction. He likes playing video games, mostly superheroes. He is very helpful in the house,” she said.

“Carl is the quiet one. He likes to be alone sometimes and likes to play video games. He still loves The Wiggles. Carl developed seizures two years after the separation but his medical condition is getting better,” she said.

Dr. Ceres Baldevia, a Negrense doctor known for volunteering her services for free, was proud to say the conjoined twins were her patients. She referred them to the Children’s Hospital at Montefiore, New York, when they were a year old. “They are now 12-year-olds,” she said.

Baldevia, who now lives in San Francisco, said Clarence and Carl still wore helmets to protect their skulls but once they are fully grown, their skulls would be patched.

Baldevia said the twins were under medical observation and would probably have to remain in the United States.

Their multimillion-dollar operations and medical upkeep have been shouldered by the hospital.

The Aguirres are staying in New York on a medical visa.

The twins’ grandmother, Evelendia “Belen” Aguirre, said she and her husband now lived on their Social Security System pensions and that their daughter Arlene did not have a job in the United States so she could not send them help.

Lola Belen used to work as a farm payroll clerk while her husband, Fernando, 65, was a farm driver. They live in Hacienda Paz Matagoy in Barangay Rizal, Silay City.

She traveled to the United States shortly after the twins were separated and stayed there for three months to lend support to her daughter.

Lola Belen said she wished a family member would be allowed to go to the United States to help Arlene because it was difficult for her to single-handedly take care of the boys.

Lola Belen has two other children—Azela, who runs a sari-sari store, and Andy, who used to work at a call center but is currently unemployed. 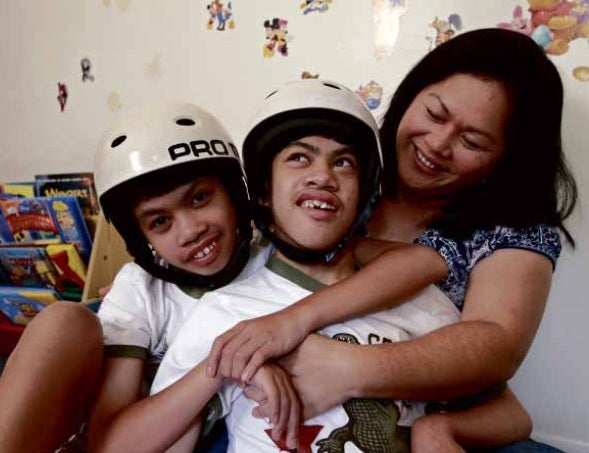 Ten years later (right) the twins play with their mother Arlene at their family home in Scarsdale, New York.  AP

She said Arlene called them from time to time to keep them posted on the progress of the twins.

Arlene has not returned to the Philippines since she left for the United States in 2003. She used to work as a company nurse for JAG in Manila before she gave birth to the conjoined twins at Philippine General Hospital in 2002, Lola Belen said.

Lola Belen gave up her job to help attend to the twins in Manila as they searched for medical assistance for the twins. They did not have money and life was difficult in Manila so they decided to return to Negros Occidental province, she said.

In Silay City, they met Baldevia, whom Lola Belen calls an international missionary, who hooked them up with doctors at Montefiore. The doctors in the United States asked that several tests be conducted in the Philippines before the twins could be brought there.

Baldevia then tapped the help of Philippine Airlines (PAL) Foundation’s Menchu Sarmiento, who provided them free airfare to Manila for the required procedures.

When everything was ready, PAL flew the twins to New York for free for their historic separation, Baldevia said.

“We thank God for allowing the successful separation of Carl and Clarence,” Lola Belen  said.

Had they not been separated, they would have grown up lying flat on their backs since they were connected at their heads, she said.

Baldevia also said she received a message of gratitude from Dr. Goodrich: “I have to again thank you for your trust and faith in my team in making this happen. The boys have done far better than the historical precedent and thanks to you, they have made it this far. Quite special event for 10 years so thanks to you.”