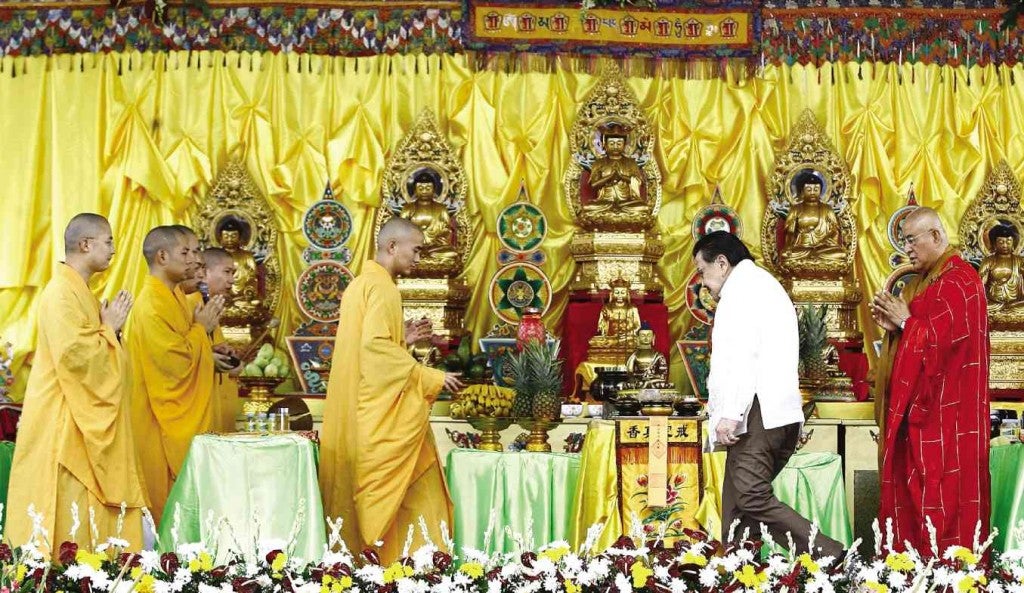 HEALING PROCESS Buddhist rituals turn a section of Quirino Grandstand into a golden shrine on Saturday, the first of two Days of Prayer set by Manila Mayor Joseph Estrada (in barong) for the eight Hong Kong tourists killed in the August 2010 hostage crisis. The second day, set for Christian rites, is Aug. 23, the fourth anniversary of the tragedy. JOAN BONDOC

Chanted prayers echoed across Quirino Grandstand in Manila starting Saturday morning as a group of Buddhist monks from Hong Kong led the commemoration of the August 2010 hostage drama that left eight Hong Kong tourists dead and strained relations for more than three years between the Philippines and the Chinese administrative region.

The 27 monks from Gig Lok Monastery, who were welcomed to the city on Wednesday by Manila Mayor Joseph Estrada, performed rituals for the souls of the victims in a prayer marathon that started at 10 a.m. and was set to end at 9 last night.

But conspicuously absent at the ceremony were the family members of the victims. They were invited to join but declined, saying revisiting  the grandstand would only bring back painful memories, according to Ferdie Ramos, a media consultant of Estrada.

For a service called Diamond Sutra, the monks led by Master Shih Pei Yao had the stage adorned with golden drapes, gilded Buddha statues, fruit offerings and fresh blooms in red, white and yellow. The names of the eight slain hostages were written and enshrined on a small altar.

The monks also held rites blessing the grandstand, a witness to the crisis that transfixed the nation before ending in a bloodbath on Aug. 23, 2010. The Hong Kong nationals were shot dead in a tour bus by a dismissed police officer who forced the vehicle to stop in front of the grandstand and held the passengers at gunpoint for 10 hours. He went amuck following a bungled negotiation and rescue operation by the police.

The monks also prayed for Filipino victims of major tragedies, particularly those who perished during the onslaught of Super Typhoon “Yolanda” in November last year.

In remarks made before the prayers, Estrada said the Day of Prayer was the city government’s way of telling the world that “what happened then must never happen again.”

“The people of Manila, most especially the city government and the Manila Police Department, must ensure the safety of tourists in Manila. This we pledge so that the lives that were lost would not have been in vain,” the mayor and former President added.

Also in attendance was Manila 3rd District Councilor Bernie Ang, who filed the resolution conveying the local government’s apology to Hong Kong earlier this year, a gesture that went around the legal and diplomatic nuances that prevented Malacañang from making the same apology as demanded by the Hong Kong government.

City Hall has set a second Day of Prayer on Aug. 23 for the Christian commemoration of the tragedy. Annelle Tayao-Juego