What foreigners like in the Filipino | Global News
Close
menu
search 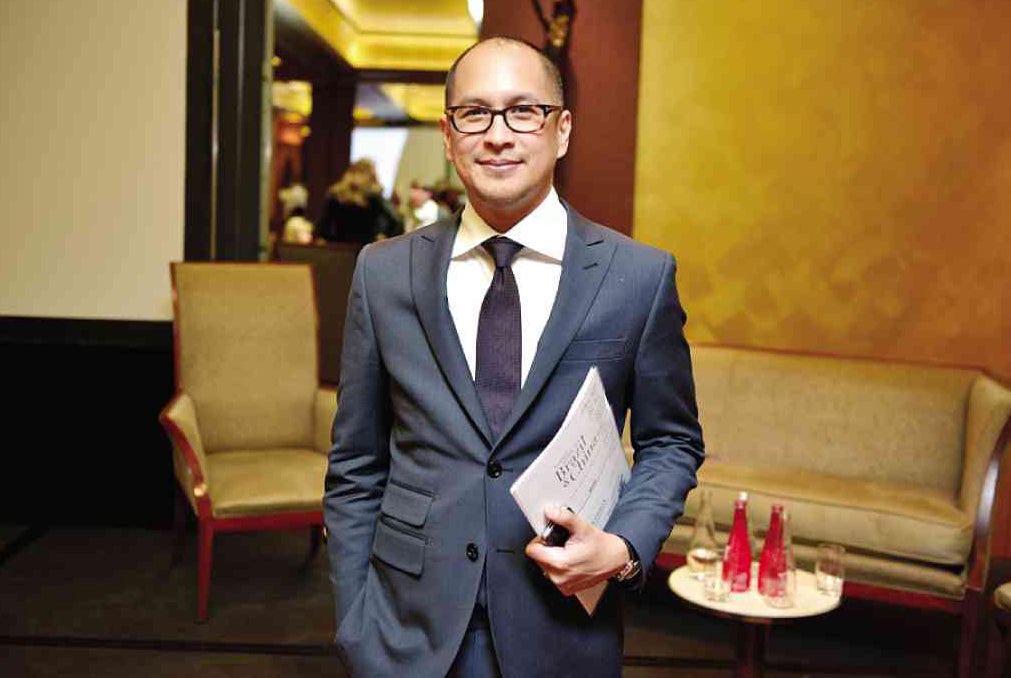 Many Filipinos have made their mark in professional leadership roles in Southeast Asia. A number have also reached top management positions in the region. Some have gone further, achieving juicy careers in the tough and bigger China market.

But as an executive planning director for one of the world’s most prestigious advertising networks in the world’s biggest economy?

The answer is absolutely yes.

Like in China’s education, media, public relations, engineering, hotel and restaurant industries, a Filipino walks shoulder to shoulder with the best expatriates working in that side of the world. He is a University of the Philippines mass communication graduate and his name is Hans Lopez-Vito, also a former TV commercial model.

For the uninitiated, the executive planning director is advertising’s most important role along with that of the chief creative officer’s.

It is a frontliner’s job and the output, the backbone of an effective advertising campaign.

Brand planning gives marketers an edge in an increasingly competitive market because it gives the communication plan focus. In a nutshell, the planner gives the brand the vision, aim and overall brandscape, the how, what, where, when and to whom the plan is communicating the messages.

Lopez-Vito began his career as a market research analyst at San Miguel Corp. in 1994. During a lightning overseas interview, he tells Global Pinoy that a marketing department colleague put him on a TV commercial that was about to be shot because his ad agency could not find a suitable talent.

That was his first taste of the advertising business. After that, he appeared in countless TV and print ads and on back sides of cereal boxes.

Twenty years later, his involvement with ads remains. But largely from behind the scenes.

He also champions BBDO Voices, the agency’s proprietary insights program aimed at tracking sociocultural trends in one of the world’s most dynamic consumer markets.

Prior to his BBDO China post, he led a pan-Asian strategy for Unilever’s take-home ice cream brands and Coca-Cola’s “Coke-with-Food” campaigns. In 2006, he was cross-posted to McCann Worldgroup offices in Toronto and New York, and eventually became vice president and head of planning at McCann Worldgroup in Manila. He is married, has a 4-year-old daughter and another one on the way.

Lopez-Vito’s daily grind is to lead a team of branding experts, engagement planners and strategic creative thinkers develop strategies that form the basis for the campaigns they develop for some of the world’s most loved brands.

As a young boy, Lopez-Vito’s only connection with the big world of business were the ads he saw on TV. He thought that the only way to make money in the corporate world was through the advertising agency business. He entered the field of marketing research upon graduation primarily because of his desire to help create and shape how companies and their brands communicated with people.

“I am your typical promdi (from the province). I was born in Bacolod, studied at the local La Salle school there, but left for Manila to study at UP Diliman. Up until I took off for the  ‘big city,’ the life I knew was very simple. It revolved around the home, my family, my classmates, and the local Boy Scout troop that I was actively involved in. To this day, my Ilonggo accent still sometimes betrays me. My wife Ruby thinks it’s adorable.”

Asked if he ever dreamt of pursuing working abroad, Lopez-Vito says: “Frankly, I never did until much later in my career. That’s because life was good to me in Manila. I was working at a great agency which took good care of me and my career (I was already VP for strategic planning at McCann at the time).

Lopez-Vito says he had “a great boss who inspired and stretched me.” He enjoyed working with his clients but eventually felt a new curiosity, a new urge emerged in him that he craved to find out how far his talent could take him. He wondered if he could truly compete on the global stage.

“I figured that the only way to find out was to see if I can replicate the career successes I had in Manila in a market that had larger global prominence.” That’s how he ended up in China, a country of 1.3 billion consumers.

On the similarities, dissimilarities and idiosyncrasies of doing advertising in China, Lopez-Vito says: “The best way to describe China is that it is one country but with multiple markets.”

In the major cities like Shanghai, Beijing, Guangzhou as well as the big provincial capitals, Lopez-Vito says the consumers are just as wealthy and sophisticated as anywhere else in the world. “In some small cities and towns, China is still very underdeveloped, and the big task for brands is to educate people about the basics of what a product is and how to use it,” he says.

“The Philippine market has its own complexity, but I think China takes this to a whole new level.”

He observes that the pace in China is very fast, the market is growing, people’s lifestyles and values are changing very quickly. As a foreigner, Lopez-Vito depends on a lot of market research as well as the perspectives of his local staff to truly be on top of the local pulse.

What makes Filipino expats shine abroad? Lopez-Vito says the easy answer is the Pinoy’s strong command of the English language. He, however, thinks there is more to the Pinoy that foreign employers like.

“I think the real and unspoken factor to the success of expat Pinoys is our cultural resilience.” We are truly the best of East and West. Because of the strong Spanish and American influence on our culture, we know how to deal with clients and colleagues from western countries. But, because we’re also Asian, it’s much easier for us to understand the cultural sensitivities of other Asians in our staff or client base.”

Lopez-Vito says the Pinoy can do well, regardless of where his job assignment takes him. “I can’t think of any other nationality that has this quality,” he says.

The global Pinoy has redefined traditional notions of nationhood, according to Lopez-Vito. Though millions of Pinoys are living abroad and are even becoming citizens of other nations, their love and allegiance remain with the country of their birth, he says.

“One no longer needs to fly to 7,100 islands to find the Philippines. They can easily find it in the values, the smiles, the warmth and cultural resilience of millions of Filipinos scattered around the world,” he says.

Lopez-Vito has been in China for quite some time. It is interesting to know what makes him stay there. For him, advertising is a highly competitive industry and it is also very global. “How far can a Pinoy promdi like me go in a playing field that is truly global? How high will I reach? I don’t know the answer yet, but I would like to find out.”

Like millions of Pinoys working abroad, he realizes that he will need to miss out being in the Philippines during important family moments.

“While in China, I have missed my nephews’ and nieces’ dance recitals. I have missed their graduations. I was also absent when my mom died. I was in Manila just the day before, but was back in Shanghai when she left us.”

What advice would he give to Pinoys who would like to work in China or elsewhere in the world? “Pinoys have the right to really aim high but, sadly, many don’t.” He says many want to go abroad to work but, how many of those who want to go abroad and want to lead?

Lopez-Vito thinks there are only a few who do. “For instance, our Asian brethren (e.g., from India, Singapore, etc.) outnumber us Filipinos in the highest ranks of companies around the world. Certainly, the Pinoy can do better. I believe many of us still suffer from  ‘colonial syndrome.’”

Lopez-Vito says, Filipinos need to be confident and can be world-class. “We can be not just good workers but also good leaders that people from countries that once colonized us are willing to follow,” he says.

What is his job like? His role at BBDO is to make sure that the brand campaigns the agency develops for its clients are rooted on solid strategies. As such, his regular day is spent in a lot of meetings, be it with his team, other agency folks or clients: On how a brand can grow more optimally, what interesting human truth or insight they can tap into when developing a campaign or what interesting technology can be leveraged to get their messages out.

“I also spend a lot of time putting together, reviewing, or delivering strategy presentations. I put a lot of energy having conversations about how our clients are performing, trying to figure out what worked in our last campaign, what didn’t and how we can do better next time,” he says.

Although he spends most of his time in Shanghai where he is based, he has also come to know China’s major airports quite well. “We have offices and clients in Beijing, Guangzhou, Hong Kong and Taiwan. Vito-Lopez travels about once every two weeks on average. During the peak strategic planning season, he travels more often than that.

Because China is such an important market for all Lopez-Vito’s global clients, he spends an inordinate amount of time doing conference calls with global hubs in the US or Europe whose clients usually set their calls either really early in the morning or late at night due to time differences.

“I usually do these calls at home. These calls are not always easy, not with an overactive and very noisy 4-year-old at home! And, every so often, I have to fly there to personally meet and present strategy to clients.” In this role, he has logged a lot of airline and hotel miles. He is not complaining though. “I think being able to travel (and travel well) even if it’s for business is both an honor and a privilege.”

What would he be like if he were a brand and what are his thoughts on seeing the Philippines from out of home?

“I can relate a lot more to Pinoy brands—brands like Jollibee and Chippy. These brands have grown so much over the last 20-30 years but, they mean the same thing to a 41-year-old like me as to a Pinoy child or teenager. I suppose that’s me. I have experienced much, the world has changed, and the world may have changed many aspects of who I am, how I dress, how I speak but I will remain a promdi, a malambing Ilonggo (with an Ilonggo accent) forever. I have also recently rediscovered something from my younger years that I lost—my faith in my God! They can take the boy out of Bacolod, but they can’t take Bacolod out of the boy.

On what makes a truly global Pinoy, Lopez-Vito puts it succinctly: “I think the Pinoy expat is like a bowl of halo-halo. He is a mix of different cultures all at once. That makes him or her the quintessential global citizen.”

(Lopez-Vito was one of the seven Most Outstanding Alumni awardees of the University of the Philippines College of Mass Communication centennial alumni homecoming celebration in 2008.)