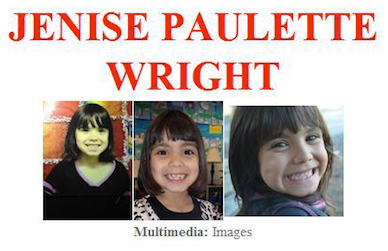 MANILA, Philippines—The parents of a missing Filipino-American girl in Washington state in the US took a lie detector test Tuesday as investigators scrambled for clues in the case with “suspicious circumstances.”

In a report by the Federal Bureau of Investigation obtained by INQUIRER.net, Jenise was with her family in a residential unit in the Steele Creek Mobile Home Park in East Brementon, Washington during the time of her disappearance.

The FBI also found that the parents was not worried for Wright’s disappearance until Sunday night as their daughter had wandered off their neighborhood on previous occasions.

Jenise Wright’s father also stated that the girl is “independent” and “tenacious” and maintained that the neighborhood is safe.

The disappearance of the girl was considered by police as a missing person case with “suspicious circumstances”, according to Kitsap County sheriff deputy Scott Wilson in a report on USA Today.

As of Monday, 80 searchers and neighbors from seven counties helped to look for the missing girl. A helicopter, tracking dogs, and cadaver dogs have also been mobilized for the search.

The Washington State Patrol and detectives are also involved in the search team.

Jenise will be a first-grader this coming school year.