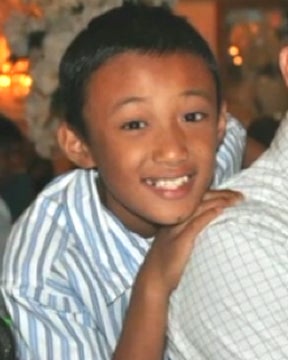 JERSEY CITY, New Jersey — Seriously injured Filipino-American teen Lheandrew Lloyd Balatbat, 14, whose parents were killed when a tornado toppled a tree onto their tents in a popular Virginia campground, remains in a coma at a hospital in Norfolk, Virginia.

Balatbat, a Jersey City native, was one of 36 people injured during the July 24 tornado, which struck in the early morning. He was in critical condition when transported to Children’s Hospital of the King’s Daughters.

Both his parents, Lord Balatbat and Lolibeth Ortega, both 38, of Danforth Avenue, Jersey City, were crushed to death by a fallen tree at the Cherrystone Family Camping & RV Resort.

Lheandrew and his two younger sisters, Lharieza Anne, 12, and Lheanna Lynn, 7, were sleeping in a separate tent when the tornado whipped into the campground.

The family had been visiting the campground every summer for the past several years and this time were celebrating the mother’s birthday.

The two girls were treated of non-life threatening injuries and released from the hospital. They are now back in New Jersey with devastated relatives, according to reports.

“I wanted to go there but my doctor said do not go there because I am not well enough to travel. My wife is the same way.”

The bodies of Balatbat and Ortega were brought to New Jersey on July 28.

Balatbat was a manager at Walgreens on Kennedy Boulevard and Seaview Avenue in Jersey City.

Workers said he was always smiling, easy-going and eager for family getaways.

Walgreens spokesman James W. Graham told CBS 2 that the company has a benefit fund for employees who have experienced hardships caused by long illnesses, accidents, natural disasters and other situations.

“A tax exempt charitable foundation, the fund each year helps hundreds of families experiencing personal tragedies or moments of extraordinary need. We made sure the family of Lord Balatbat and Lolibeth Ortega is aware of the fund and we will help them access it if they are interested in doing so,” Graham said.

Lolibeth Ortega was a lab technician at Quest Diagnostics in Teterboro, New Jersey.

Principal Francine Luce of Ezra L. Nolan Middle School, where Lheandrew is a student, described the boy as “wonderful” and “likeable.”

“He is extremely polite — went out of his way to say hello and speak to every teacher on a personal level all the time,” Luce told The Journal.

“You don’t get that from all the students. He is a very likeable kid.”

Balatbat’s colleagues at Walgreens, led by Mohsin Khan, have been raising funds through gofundme.com/c40u9s to help cover the couple’s funeral expenses and the children’s daily expenses.

“All funds raised will be transferred to a trust fund in the name of the children that will be created by their legal guardian,” Khan said in his appeal for help.

The group is donating half of the $10,000 it has raised in the annual event that buys school supplies and backpacks for city children.

“There is going to be a tremendous amount of rehab, of education dollars of support for the children’s caretakers,” said Fulop at the event attended by about 200 people.

“Everyone is pulling together to help in any way we can.”