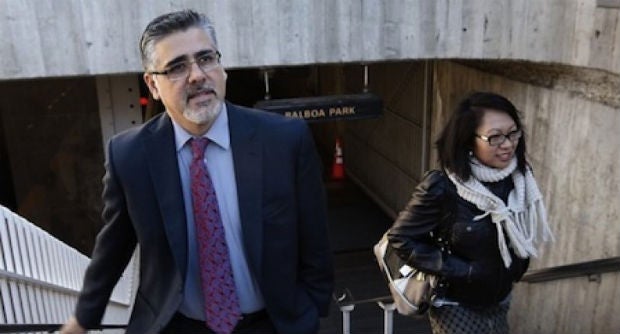 The existing San Francisco HR handbook states that: “You must notify your supervisor if you are, or become, related to or romantically involved with another employee in the workplace over whom you have the authority to impose or recommend an employment action.”

The problem, insiders said, was that members of the Board of Supervisors, just like all elected city officials including the mayor, have no higher-ups, so there was nobody to report to.

The new rule will now require the subordinate to be reassigned to a new manager rather than have him or her report to a romantic partner.

Redondiez reportedly went on unpaid leave from her $95,082-a-year position last May.

Details of how the new guidelines will be implemented are still under study and the final product has to be approved by the employees’ union.

Avalos isn’t the only local elected official to have had a romantic relationship with a staff member. In 2007, then- Mayor Gavin Newsom made headlines for having an affair with his appointments secretary, who was also married to his campaign manager.

Avalos represents the Excelsior district, which has the highest number of Filipinos in San Francisco. He reportedly separated from his wife earlier this year.

ADVERTISEMENT
Read Next
A boy, a girl, manongs and musicians
EDITORS' PICK
Nograles: Cabinet members to donate 75% of monthly salary to aid COVID-19 fight
Quick chat with Nicole Andersson: ‘You really don’t need much to be happy’
IATF to LGUs: Issue ordinances vs attacks on frontliners, COVID-19 patients
Diokno to Duterte: OK to make fun of buck tooth, but focus on people’s needs first
Robredo spox thanks Duterte for defending VP’s efforts vs COVID-19
10 Filipinos positive for COVID-19 in UK, 7 in Ireland — envoy
MOST READ
Sotto on Isko Moreno’s call: We do our job without the media following our every move
ADB warns PH against prolonged lockdown
Cook more and eat less: Tips on your quarantine diet
Duterte fires PACC’s Luna for urging NBI to probe Robredo
Don't miss out on the latest news and information.