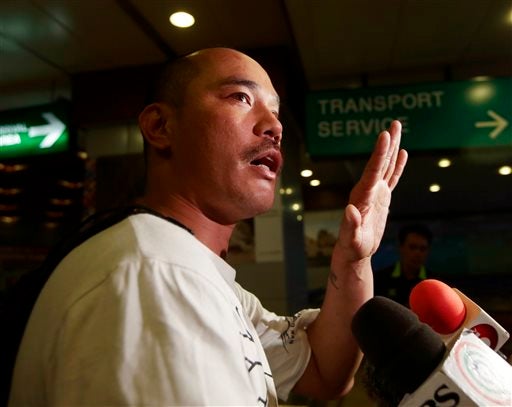 Rexon Rodriguez, an Overseas Filipino Worker (OFW), gestures as he talks to the media upon arrival with other workers at the Ninoy Aquino International Airport at suburban Pasay city, south of Manila, Philippines, following their repatriation from Libya Saturday, Aug. 2, 2014. AP

MANILA, Philippines — Sixty more overseas Filipino workers (OFWs) have returned to the country during the past three days from strife-torn Libya, bringing to a little more than 800 the total number of OFWs who have availed themselves of the government’s free repatriation program.

This was reported on Sunday, by the Department of Labor and Employment, which said at least 624 of the OFWs have been “directly assisted” by the agency through its Assist WELL program.

Later on Sunday night (Aug. 3), 15 OFWs were scheduled to arrive at the Ninoy Aquino International Airport’s Terminal 1, said the DOLE.

Labor Secretary Rosalinda Baldoz said they “have the master list of the names of the new repatriates.”

In a statement, she also said “officers of the Repatriation Assistance Division of the Overseas Workers Welfare Administration and representatives of the Libya Quick Reaction Team, headed by the Philippine Overseas Employment Administration, will be at the airport to ensure that the repatriates get proper assistance.”

Baldoz noted the OWWA-led welfare assistance committee had been instructed to provide the following services to OFW repatriates: Immigration and exit formalities at the NAIA; temporary accommodation at the OWWA hostel in Pasay City; bus and boat fares for repatriates who are going back to the provinces; emergency medical assistance, and stress debriefing.

The DOLE, she said, has been “working to ensure an effective and successful reintegration of OFWs repatriated from crisis and emergency situations in their countries of deployment by reaching out to them through the distribution of flyers containing relevant and useful information (about the agency’s services).”

“We want to effectively convey to all OFW repatriates that the government is prepared to welcome them in their own country and ready to address their welfare, employment, livelihood and legal needs after they arrive,” Baldoz added.

When the government’s repatriation program started in June, there were an estimated 13,120 Filipinos in the north African country.

With more than 12,000 OFWs still in Libya, the labor department and Department of Foreign Affairs have repeatedly appealed to them to return home.

Baldoz urged them to get in touch with the Philippine Embassy and the Philippine Overseas Labor Office in Tripoli and “use the services of OWWA’s 24/7 operations center” and sign up for the repatriation program.

Alert Level 4, which calls for the mandatory repatriation of Filipinos in Libya, is in force, according to the DFA.

According to the DOLE head, the agency has been closely monitoring the situation in Libya through the Philippine Overseas Labor Office, which is based at the Philippine Embassy in Tripoli.

Philippine pleads with workers in Libya to return