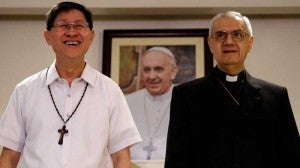 MANILA, Philippines–The visit of Pope Francis to the Philippines in January 2015 will be an opportunity for the Filipino people to show who they truly are—resilient and having a “bottomless” hope, according to Manila Archbishop Luis Antonio Cardinal Tagle.

Other Catholic prelates also said that the papal visit would be a chance for the Filipinos to grow richer in their faith.

“Show him who we truly are, especially the resilience of the Filipinos coming from faith, coming from compassion, coming from bottomless hope,” Tagle said Tuesday in a press briefing where he announced that the Pope’s apostolic visit to the country has been scheduled for January 15 to 19, 2015.

The visit of Pope Francis coincides with the 20th anniversary of World Youth Day Philippines, which took place in Manila on January 10 to 15, 1995.

“We who experience an average of 20 to 22 typhoons a year, we can show the world what it means to be pained, to clean up, to stand again and to face another morning,” Tagle added.

Although the Vatican would release other details of the papal visit later in the year, Tagle said Pope Francis earlier expressed his desire to visit and be one with the people in the Typhoon Yolanda (Haiyan)-hit Visayas.

“Pope Francis, from day one of his papacy, has wanted to journey with people where they are,” he said.

“I was a witness of how he was affected by Typhoon Yolanda,” Tagle said, recalling an encounter with Pope Francis in Vatican in November 2013 during the unveiling of a mosaic image of the Philippines’ St. Pedro Calungsod.

“Because of the typhoon, the whole ceremony acquired a different configuration, it was not just a blessing of an icon. The Holy Father during the event said he was one with the suffering people, and that we should not be afraid to ask God, ‘Why?’ as children ask parents ‘Why?’ Not so much for clear answers but to get the attention of the parents,” Tagle said.

“So he said, maybe if the Filipinos, especially those suffering, keep on asking, ‘Why? Why?’ the tender eyes of the Father will be directed to the Filipino people.

“So if he said that last year, and I know that it was said sincerely, not for rhetoric, it was from the bottom of his heart, now that he’s coming to the Philippines, wow, I’m sure that desire of the heart will push him to get in contact with the people,” Tagle said.

Archbishop Giuseppe Pinto, the current apostolic nuncio to the Philippines, said he would like the papal visit to be an occasion for prayer and spiritual renewal.

“My wish is that this visit will be a spiritual typhoon,” Pinto said.

Early this month, a team from the Vatican went to Tacloban to inspect the possible sites to be visited by Pope Francis, including areas where he could celebrate Mass.

Meanwhile, Catholic prelates welcomed the scheduled visit of Pope Francis, saying it would renew and strengthen the faith of the Filipino people.

“This good news will bring joy, peace and renewal to many people not only to us bishops, priests and religious men and women,” Cubao Bishop Honesto Ongtioco told reporters in an interview.

Legaspi Bishop Joel Baylon, former head of the Catholic Bishops’ Conference (CBCP) Commission on Youth, said the papal visit would be both a “blessing” and an “opportunity” for the faithful, especially the youth, to have a personal encounter with the Argentine pope.

In an article posted at the CBCP website, Baylon said the visit would be a rare chance for Filipino Catholics to grow richer in their faith.

Baylon also believes that the Pope’s mere presence in the country will not only inspire Filipinos but also raise the morale of those affected by the recent disasters that hit the country.