POEA exempts some OFWs from deployment ban in Libya 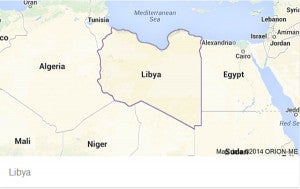 MANILA, Philippines—Despite the worsening political and security situation in Libya, the Philippine Overseas Employment Administration (POEA) exempted some Filipinos from the deployment ban in the strife-torn country.

In its latest governing board resolution, the POEA said it would continue to process and deploy Filipino workers in offshore oil rig platforms, provided they would not pass through mainland Libya nor spend their vacation there.

The exemption also covers Filipinos married to Libyan nationals, and overseas Filipino workers (OFWs) employed by international organizations, but only if such agencies or organizations they work for still maintain a presence in Libya.

However, the POEA said additional documents for the processing of the Overseas Employment Certificates of those working in off-shore oil rig platforms would be required.

These include an employer contingency plan for the evacuation and repatriation of the workers; and employer undertaking guaranteeing the safety of the workers during their stay in Libya, and readiness to immediately repatriate them as may be warranted.

These documents should be verified by the Philippine Overseas Labor Office (Polo), the POEA said.

“The undertaking shall clearly state the exact location of the work site of the workers,” it said, adding that the resolution was based on an advisory submitted by the Department of Foreign Affairs (DFA).

The POEA earlier issued a resolution, exempting the above-mentioned groups, together with Filipinos working in Libyan hospitals, schools and at the Libyan National Oil Company, from the deployment ban upon the recommendation of DFA.

However, the POEA decided to reduce to its current list the number of Filipinos allowed to return to Libya due to the escalating political tension there.

The DFA raised the alert in Libya to the highest level 4 after the kidnapping and beheading of the Filipino construction worker in Benghazi on July 15, reportedly because he was not a Muslim.

Alert level 4 calls for the mandatory evacuation of all Filipinos there.

But the DFA said that there were so far no takers of the government’s offer to repatriate 13,000 OFWs in Libya for free.

Labor Secretary Rosalinda Baldoz said they expected a low-turnout of Filipinos to register for the repatriation because many were afraid to lose their high-paying jobs in Libya.

No Filipinos taking up offer to flee from Libya turmoil